Plants vs. Zombies Wiki
Register
Don't have an account?
Sign In
Advertisement
in: China exclusive, Archived, Zombies,
and 5 more
English

For the version in Plants vs. Zombies: All Stars, see Spider Demon Imp.

War of the Spider Woman 1-5
N/A
Spider Devil Zombie was a zombie in Plants vs. Zombies: Journey to the West. She served as the boss of the chapter "War of The Spider Woman", and appeared in multiples, being 7 of them. She threw spider webs which immobilize plants that are struck. Blover could be used to blow the spider webs away.

Spider web that is shot by Spider Devil Zombie

Spider Devil Zombies In The great wall of china 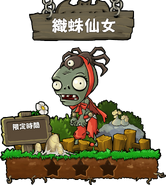