Spear-mints generates a number of higher-level Spikerocks on the board and provide a temporary boost to all Spear-mint Family plants on the lawn.

(Digs up the spawned Spikerocks)

Spending 100 Mints
"Slash!" Spear-mint enthuses. "Slishy-slashy-slice!" she adds, wanting to make sure she's getting her point across. She wants to be very clear on this.
Spear-mint is a Power Mint plant in Plants vs. Zombies 2. When she is planted, she immediately generates a number of higher-level Spikerocks towards the back of the lawn. She can also boost Spear-mint Family plants by increasing their damage, penetration, and toughness.

Like other Power Mints, she cannot be imitated or affected by other mints. After 6 seconds, Spear-mint will disappear.

Spear-mint can be obtained with 100 mints in the Store when she is available.

Spear-mint shares her name with a real-life plant; however, the word "spear" is emphasized, hence her appearance and ability.

Spear-mints generate a number of higher-level Spikerocks on the board and provide a temporary boost to all Spear-mint Family plants on the lawn.

"Slash!" Spear-mint enthuses. "Slishy-slashy-slice!" she adds, wanting to make sure she's getting her point across. She wants to be very clear on this.

Note: Spear-mint's recharge is 30 seconds shorter during the Improve-mint event.

Spear-mint spawns five Spikerocks at level 1, which can be dug up for sun if the sun shovel perk is available. when planted, Spear-mint is very good in regular levels, as planting her once guarantees that not even Conehead Zombies will get past the first column, as well as being a good stopper for Chicken Wrangler Zombies and their Zombie Chickens and Weasel Hoarders and their Ice Weasels. Since the Spikerocks don't despawn, repetitive planting of the Spear-mint can flood the lawn with Spikerocks. This can save the amount of sun that would have been used for planting five Spikerocks, making this and the fact that you are now able to use the Instant Recharge upgrade on Power Mints make Spear-mint very good for Last Stand levels. It is also worth noting that the tiles must be empty for a Spikerock to spawn, making areas with tombstones very annoying for Spear-mint.

In addition, the plants that she boosts benefit greatly from the boost and can often take out entire hordes with a few shots. Laser Bean and Bloomerang are good examples, as when boosted by Spear-mint, they can defeat entire lanes while Spikeweeds and Spikerocks can deal with zombies that have higher health when boosted. Homing Thistle gets the benefit of dealing with targeted zombies more quickly when boosted, having the potential to defeat more zombies than usual, and finishing off Gargantuars extremely quickly.

Spear-mint is very powerful in Arena, as the spawned Spikerocks can pop open newly released Zombie Hamsterballs, whilst also being boosted and taking out the buffed zombies very quickly. When paired with Laser Beans and Bloomerangs (commonly used while she was available), the zombie horde, though stronger due to Arena, can be wiped out quickly and effectively. Instant-recharging Spear-mint to boost Laser Beans is advisable.

Using Spear-mint in "Never have more than X plants" levels is a bad idea due to spawning additional Spikerocks on planting, so avoid using her in those levels. Spear-mint is also ineffective in Big Wave Beach since she cannot spawn Spikerocks if there is water in the rightmost columns. The ones she does manage to plant will also either be ineffective due to being so close to the house or be washed away by the water.

Another use of Spear-mint is as a potential Gold Bloom. Since she spawns five Spikerocks, you can shovel these up in regular levels to obtain extra sun. However, the higher level your own Spikerocks are, the less sun will be generated as they would cost less. In Arena, however, upgrades except Mower Launch do not work, so this use of Spear-mint is not possible.

If the Spikerocks are boosted, either in Zen Garden or Arena Boosted Tournaments such as Boosterama or by gem cost, Spear Mint will also generate the number of boosted Spikerocks depending on her level, which would pull all the zombies back to the end of the lawn (only in Boosterama). This is very useful as it pull zombies back to their starting position when your lawn is under severe attack. It is basically Thyme Warp combined with Spikerock! 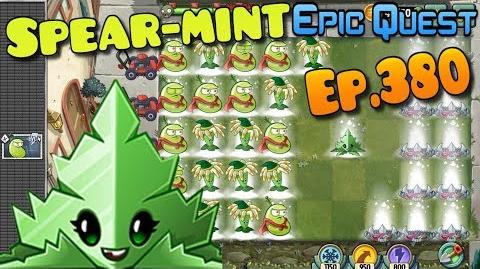 Retrieved from "https://plantsvszombies.fandom.com/wiki/Spear-mint?oldid=2359525"
Community content is available under CC-BY-SA unless otherwise noted.