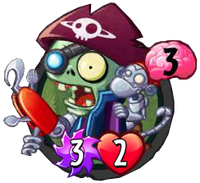 This moves to a random lane when a Plant is played here.
At first he just dabbled in space piracy, but then he got hooked.
Space Pirate is a galactic rare zombie card in Plants vs. Zombies Heroes and a member of the

Anti-Hero 2 trait, and his ability moves him onto a random lane when a plant is played on his lane.

His appearance and description most likely reference the fact that stereotypical pirates usually have hooks.

At first he just dabbled in space piracy, but then he got hooked.

Space Pirate is just like Zombie Chicken that only has 1 more strength but costs 2 more brains, which is not really remarkable. However, what makes him shine is his

Anti-Hero 2 trait, and because of his ability, he has a higher chance of doing 5 damage to the plant hero as it prevents plants from blocking his path easily.

Arguably, the best hero that can use him is Brain Freeze, as this zombie is in the pet tribe which enables synergy with Zookeeper and Cat Lady. Barring his pet tribe, he can also work well with Swashbuckler Zombie, as he is also in the pirate tribe to make him grow stronger if he manages to hurt the plant hero, which is very easy to do so as he will most likely move into an empty lane. Captain Flameface can give him the

Strikethrough trait, but keep in mind that his

Anti-Hero 2 trait only activates if there are no plants in the lane.

However, you want to be careful with his health, as

Guardian heroes, especially Spudow, can destroy this zombie very easily. If you can, try to boost his health with Vitamin Z or Camel Crossing.

You can use Teleport or Teleportation Zombie to play him in the Zombie Tricks phase, as a surprise for the plant hero. However, only Super Brainz and Huge-Gigantacus can do this normally.

Space Pirate is a powerful glass cannon that you cannot just play plants to block him. The best ways to deal with this zombie is using tricks like Banana Bomb, Shamrocket (if he is in an empty lane), or Whack-a-Zombie (if he is in front of a plant). You can also fill all the lanes with plants to prevent him from attacking you directly.

If you do not have any tricks, try to lure him into a lane with plants such as Hot Date, Sweet Pea, or Banana Peel to prevent his 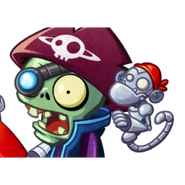 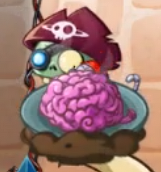 Lurch for Lunch being used on Space Pirate 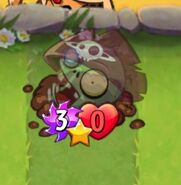 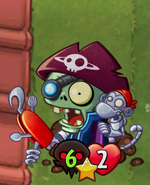 Space Pirate with the 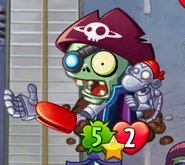 Gigantic Space Pirate due to a glitch