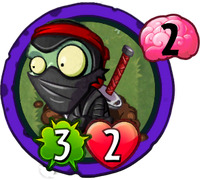 While in an Environment: The first time each turn this does damage, do 1 damage to each plant.
You will never hear him coming in the vacuum of space.
Space Ninja is a galactic uncommon zombie card in Plants vs. Zombies Heroes and a member of the

. He does not have any traits, and his ability does 1 damage to all plants when he does damage in any environment for the first time every turn.

He is based on a ninja, a covert agent or mercenary in feudal Japan, whose functions of the ninja included espionage, sabotage, infiltration, assassination and guerrilla warfare.

His description references how sound cannot travel and be heard in space due to there being no air.

His weapon may be a reference to the lightsaber from the Star Wars series.

You will never hear him coming in the vacuum of space.

Space Ninja has above-average stats for his cost, but his ability is where he really shines. If played in an environment, he can be used to remove one larger target and several smaller ones in one swoop in a manner similar to Z-Mech's Missile Madness superpower. However, his low health leaves him susceptible to removal such as Banana Bomb, Potato Mine, and Spikeweed Sector, so it is best not to play him if you suspect your opponent may be holding these cards. Also, beware of playing him on an empty lane if your opponent's Super-Block Meter is close to full, as both his attack and ability may be blocked.

Space Ninja is a great counter to Mushroom Grotto, as it will allow him to use his ability and attack all of the Puff-Shrooms made by it.

If playing as Impfinity, playing Space Ninja in Laser Base Alpha can allow him to completely clear the field of non-

Armored plants if his ability successfully activates. However, be wary of Grapes of Wrath, or Punish-Shroom if the field is filled with mushrooms. If you do not have Laser Base Alpha, putting him in a cheap environment such as Graveyard and then giving him

Deadly via Super Stench or Barrel of Barrels, or having a Zombot Sharktronic Sub on the field can also do.

Space Ninja's ability can be potentially very dangerous, especially if you are playing a deck with many low-health plants. Fortunately, his low health makes him very easy to remove. As mentioned above, Potato Mine and Banana Bomb are effective counters. You can also replace the environment he is in with one that does not allow his ability to activate such as Spikeweed Sector or Force Field. If you cannot replace the environment with another environment that can destroy him, then moving him out of it with Sweet Potato, Banana Peel, or Whipvine can also do, since he needs to be in an environment for his ability to activate. You can alternatively make the zombie hero think twice before placing Space Ninja in an environment by having the entire field filled with nut plants and having a Mirror-Nut as when his ability is activated, all the nut plants get damaged, resulting in the zombie hero being severely damaged. 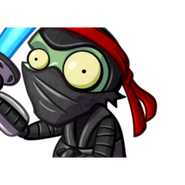 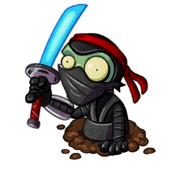 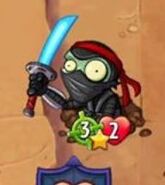 Space Ninja with the 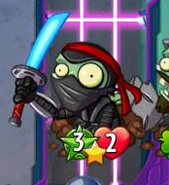 Space Ninja with a star icon on his strength 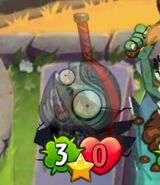 Two Space Ninjas on the field, one of them being gigantic due to a glitch 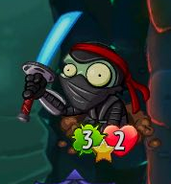 Space Ninja tinted gray due to a glitch

Devour being played on Space Ninja