This Zombie moves to the right when it hurts the Plant Hero.
Only in the big wide sky will he find Serenity.
Space Cowboy is a galactic legendary zombie card in Plants vs. Zombies Heroes and a member of the

. He has the Amphibious and

Strikethrough traits, and his ability moves him onto the adjacent lane on his right every time he does damage to the plant hero, unless that lane is already occupied by another zombie.

He is based on a cowboy, an animal herder who tends cattle on ranches in North America, traditionally on horseback, and often performs a multitude of other ranch-related tasks.

Only in the big wide sky will he find Serenity.

Space Cowboy can be an extremely powerful finisher despite his low strength, thanks to his

Strikethrough trait and ability. Once he attacks on his lane, he will then move to the right and attack again, repeating the same process until he is no longer able to move to the right or if your opponent blocks his attack. Under ideal circumstances, Space Cowboy will be able to dish out 15 damage on the turn he is played, which is a huge chunk of health taken from your opponent, either putting them in critical condition, or straight out defeating them. Not only that, Space Cowboy is cheap, so while you will still need to maintain control, you don't have to do so as long as you would with the other finishers.

But Space Cowboy, as devastating as he is, has his own drawbacks, primarily due to his ability. A drawback of Space Cowboy would be how he has to face multiple plants in a single turn of combat. While his health is decent, it will be depleted much more quickly. An even bigger drawback, however, would be the fact that you essentially have to rely on Space Cowboy alone to make an impact, as the field needs to be empty for him to move; since you play your fighters before your opponent plays their cards, playing Space Cowboy can be a big gamble, as your opponent can see your play and remove Space Cowboy whether by direct or indirect means, leaving you with nothing else to defend yourself.

Therefore, while Space Cowboy can theoretically turn the tables by himself, it is highly recommended to support him nonetheless. There are two ways to do so: tricks (since Space Cowboy doesn't go well with environments) and zombie synergy.

Tricks should be your main way of assisting Space Cowboy, and there are a variety of tricks that excel at doing so.

Fusing him with Disco Dance Floor, as well as playing him on Moon Base Z, are also perfect ways to activate his ability. Impfinity can only do this naturally. Another good environment to use is Graveyard, as this will protect him from plant tricks such as Whack-a-Zombie and Lawnmower, as well as giving him a very valuable damage buff, all for the cheap cost of 1

. All sneaky heroes have access to this combo naturally.

Space Cowboy may not seem like much, but in fact, he is one of the more dangerous legendary zombies due to his ability to hit you multiple times. And if he is given

Frenzy or extra strength, he becomes even more dangerous. Hence, he must be destroyed as soon as he is played. Instant-kills like Whack-a-Zombie and Chomper work the best, and if you don't have them, get as many plants on the field as you can; since Space Cowboy will fight multiple plants in a single turn, destroying him in combat will be easy.

You can also prevent Space Cowboy from activating his ability by protecting yourself from his attack with Soul Patch or Uncrackable, or moving him to the rightmost lane using Whipvine. Garlic's ability nullifies Space Cowboy's ability, and Body-Gourd will fill up your Super-Block Meter to enable you to block his attack, but unlike the former two, it is only a temporary solution. Or, if you are a Smarty hero, you can

Freeze this zombie using Iceberg Lettuce or Chilly Pepper to stall him for a turn.

Note that unless you block his attack, he will move first before plants with "When hurt/destroyed" abilities like Guacodile, Hothead, and Prickly Pear activate them, rendering them useless.

You may also want to get rid of environments that activate his ability, like Moon Base Z. 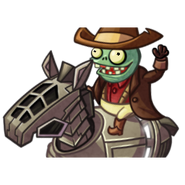 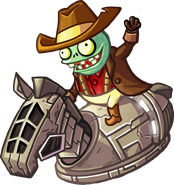 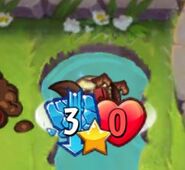 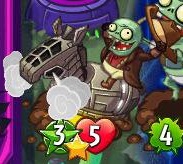 Space Cowboy about to do an

Gigantic Space Cowboy due to a glitch

Small Space Cowboy due to a glitch

Space Cowboy with a star icon on his strength

Space Cowboy while Pecanolith is on the field

Escape through Time being played on Space Cowboy

Space Cowboy being the featured card in the menu for the September 3rd, 2017 Daily Challenge