When played: Do 1 damage to each Zombie.
Sour. Bitter. Resentful. It's all true. But he's got his reasons.
Sour Grapes is a premium rare plant card in Plants vs. Zombies Heroes and a member of the

. He does not have any traits, and his ability does 1 damage to every zombie on the field when he is played. His closest zombie counterparts are Fireworks Zombie and Gizzard Lizard.

He is based on a grape, a fruiting berry of the deciduous woody vines of the botanical genus Vitis. He also bears a resemblance to Grapeshot, as both are clusters of purple grapes with an angry expresson that fires grapes.

His name is based on the term "sour grapes," used to refer to a behavior in which someone adopts a negative attitude to something because they cannot have it themselves. Additionally, some grapes are also simply sour.

His appearance is a pun on "sour grapes," as Sour Grapes is literally a bunch of grapes with a sour expression.

The words "sour," "bitter," and "resentful" mentioned in his description are words related to jealousy, which are references to his name and facial expression.

Sour. Bitter. Resentful. It's all true. But he's got his reasons.

Sour Grapes is a cheaper and less powerful version of Kernel Corn, and can be used the same way as him, to finish off damaged zombies or to weaken out all of the zombies on the field. He is also surprisingly effective against most zombie heroes from the

Crazy class, such as Impfinity or Electric Boogaloo. This is because the majority of the Crazy zombies have 1

, allowing Sour Grapes to easily wipe them out. However, this can also be his downfall, specifically with decks that benefit from zombies being destroyed to boost Valkyrie. This is most prominent with Professor Brainstorm, so decide whether it is worth the risk to destroy many zombies in risk of boosting a Valkyrie. Also, if there is a dangerous zombie with a "When hurt" ability like Gargantuar-Throwing Gargantuar, its ability will activate.

He is also useful when combined with Sergeant Strongberry, doing 3 damage to every zombie on the field to take out zombies with higher health, or activating the infamous Sergeant Strongberry loop if there are two of them. If you're playing as Nightcap, using this directly after using The Great Zucchini will wipe the field of zombies. However, this strategy is highly impractical, as you will have to save up 13 sun.

Armored and shielded zombies are completely unaffected by the ability, so it is best not to use this plant when there are many

Armored or shielded zombies on the field, and to use more powerful plants to take them out first.

Sour Grapes itself should not be too difficult to take out since he only has 2 strength and health. Most zombie fighters should be able to take Sour Grapes out. A simple Bungee Plumber or Rolling Stone can take this out, along with Weed Spray or The Chickening which can also take other plants out with it.

However, the player should worry the most about his ability when played, especially when the player is playing as a Crazy zombie hero. The best counters for this plant are

Armored zombies, as they can withstand Sour Grapes' ability without taking any damage. To protect zombies without the

Armored trait, the player can use boosting cards like Yeti Lunchbox or Camel Crossing.

However, with the right cards, Crazy heroes can also use this to their advantage. If they pack a deck with Valkyrie, this can end up giving Valkyrie a boost of 2 strength for each zombie that is destroyed by Sour Grapes. Combined with tricks like Lurch for Lunch, Maniacal Laugh, and Teleport, this can end in an instant win once used. Other zombies that activate their abilities when they take damage such as Newspaper Zombie or Jester can also make your opponent think twice about playing Sour Grapes.

It is not recommended to Bounce Sour Grapes as this will allow the opponent to play him again and re-activate his ability.

If you're a Beastly hero, playing Squirrel Herder can help, but watch out for Grave Buster in this case. However, it is not recommended to do so since it doesn't really prevent Sour Grape's ability from happening and a 2/2 for turn 4 is poor. 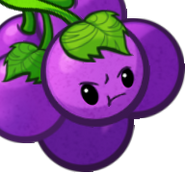 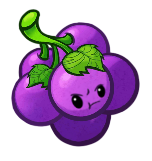 Sour Grapes activating his ability from the player's point of view

Sour Grapes activating his ability from the opponent's point of view

Sour Grapes tinted gray due to a glitch

Gigantic Sour Grapes due to a glitch

Nibble being played on Sour Grapes 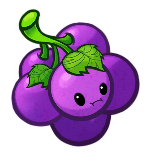 Sour Grapes on the field

Sour Grapes activating his ability from the opponent's point of view 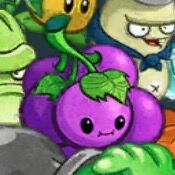 Sour Grapes in the Multiplayer menu