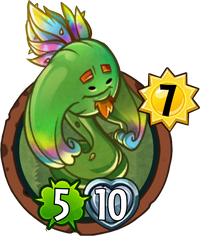 If your Hero would get hurt, this gets hurt instead.
Has been gently encouraging Cherry Bomb and Sour Grapes to attend his meditation class.

Soul Patch is a premium legendary plant card in Plants vs. Zombies Heroes and a member of the

Armored 1 trait, and his ability redirects all damage that is supposed to go to the plant hero to him. This ability persists until all Soul Patches are removed from the field. His closest zombie counterpart is Planetary Gladiator.

His name is a reference to the small patch of facial hair he has, known as the soul patch.

His appearance and description seem to refer to the hippie culture commonly associated with the mid-1960s.

His description mentions Cherry Bomb and Sour Grapes and implies that they are very angry (and need to calm down via meditation).

Has been gently encouraging Cherry Bomb and Sour Grapes to attend his meditation class.

Soul Patch is a fantastic clutch card able to absorb a good amount of damage and hit quite hard, allowing you to rebuild your defenses or stall a few turns for victory while he holds the line.

But while Soul Patch has a lot of health, it can be depleted very quickly due to him redirecting any damaging done to you as well. Therefore, you need to boost Soul Patch's survivability to get the most out of him, and the best option is to play shielding cards like Root Wall, Peel Shield, and Force Field which allows Soul Patch to absorb and nullify as much damage as he can, making both it and you completely invulnerable (unless stat-degrading or instant-kill cards are used). If that is not an option, play a Team-Up plant like Wall-Nut in front of him. Then, to prevent as much damage done to him as possible, fill the other lanes with plants.

Since Soul Patch is a flower, he can boost the efficiency of Power Flower's ability for a long time due to his great bulk, while Briar Rose punishes opponents that try to use strong zombies to destroy him. Since he is also a root, Starch-Lord can give him a small initial boost, making him harder for your opponent to deal with when he is played.

Using Pecanolith and Soul Patch together is also a useful combo, as he essentially has 10 strength, being able to destroy any non-boosted zombie fronting him. However, he will get weaker as he takes damage, so again, try to keep his health high with health-boosting cards or shield him.

Citron and Beta-Carrotina are able to Bounce him with Rescue Radish, restoring him to full health, and then play him again. However, Bouncing him and then replaying him on the same turn can only be done starting from turns 10 and on, so it can be quite risky to Bounce him before that if your health isn't high.

Deadly zombies (excluding Cosmic Imp); due to his ability, he is vulnerable on not only his lane, but any empty lanes as well. Instant-kill cards also pose a threat to him, especially Primordial Cheese Shover and Zombot 1000.

When your opponent has this plant on the field, try to Bounce him away (although your opponent can play him later again), or destroy him with instant-kill cards such as Locust Swarm, Cut Down to Size, and Rocket Science. Additionally, zombies with the

Deadly trait that have more than 1

are recommended as they can instantly destroy this plant if they attack on an empty lane or Soul Patch itself.

If you are against a flower or root deck containing Soul Patch, destroy any Power Flowers, Briar Roses, and Starch-Lords before he synergizes with them and causes more trouble.

Retrieved from "https://plantsvszombies.fandom.com/wiki/Soul_Patch?oldid=2083429"
Community content is available under CC-BY-SA unless otherwise noted.