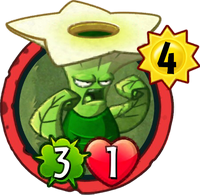 When played: Do 1 damage to the Zombie Hero for each Plant.
Victory faster than the speed of sound.

Sonic Bloom is an event plant card in Plants vs. Zombies Heroes and a member of the

. It does not have any traits, and its ability does 1 damage to the zombie hero for every plant on the field, including it, when it is played. Its closest zombie counterpart is Flamenco Zombie.

Its design, fighting pose, and attack animation are all references to Guile, a character from the Street Fighter series. Sonic Bloom's name could also be a reference to Sonic Boom, one of Guile's signature special attacks.

In addition, it may be a reference to "Sonic Boom," an Animated TV shows.

Its description references the fact that sonic booms are created when an object travels faster than the speed of sound.

Victory faster than the speed of sound.

Sonic Bloom can be treated as the plant version of Flamenco Zombie, although their standards are different; while Sonic Bloom's ability does less damage per fighter on the field (1 compared to 2), all fighters regardless of tribes count toward it, unlike Flamenco Zombie whose ability only counts on dancing zombies in play. This makes it really useful when you combine this with Team-Up plants like Shroom for Two or Pair of Pears to do even more damage to the zombie hero. If you manage to swarm the field with lots of plants by the time you play Sonic Bloom, it can do a maximum of 10 damage to the zombie hero.

In addition, this is in the flower tribe, which can benefit from Template:PvZHLink or Briar Rose, although Sonic Bloom has very low health, and only Solar Flare can take advantage of its tribe. If you are playing as Nightcap, you can play Rescue Radish to Bounce Sonic Bloom so you can replay it and reuse its ability. If you are playing as Spudow or Captain Combustible, and you wish to use this card beyond its ability, boosting its health is a must. However, its strength is mediocre as well, so you must find a way to boost that as well.

An easy way to do a ton of damage to the zombie hero is to play this plant in Pair Pearadise, resulting in the damage being doubled plus one. However, be warned that doing so charges their block meter twice. You will also want to make sure that there are a lot of plants on the field in order to perform this strategy well.

Unless necessary, it is not recommended to play this if the zombie hero's Super-Block Meter is close enough to full, as it just wastes Sonic Bloom's ability to do heavy damage to the zombie hero. Do not play this when Planetary Gladiator is on the field, as he will absorb all the damage and make its ability useless. In addition, you would also want to be careful against field-clearing cards like The Chickening or removal cards like Locust Swarm that can lower the number of plants on the field.

Unlike Flamenco Zombie, Sonic Bloom can do more damage the more plants of any tribe there is on board, and due to that fact certain plants have Team-Up, it can end up doing a lot of damage to the zombie hero. In addition, you cannot avoid its ability unless your Super-Block Meter is near full. To avoid that large amount of damage to your hero, destroy as many plants as possible by using tricks such as The Chickening and Weed Spray. Other ways to destroy swarms are using cards like Fire Rooster to attack 2 plants on one lane,

Strikethrough zombies like Line Dancing Zombie, Fireworks Zombie, or Barrel of Deadbeards to destroy all plants with 1 health.

You can also have Planetary Gladiator on the field so that you can avoid the damage since he will absorb it all.

If Sonic Bloom is already in play, you can play any zombie to destroy Sonic Bloom easily as it has very low health. Tricks like Bungee Plumber and Electrobolt work as well. You can also take advantage of its health and use Nibble to destroy it quickly and heal your hero.

Unless you are certain that you will be able to finish off the opponent before the Plants Play phase next turn or you deal with the other plants, do not Bounce this plant, as it can be replayed to do damage to you again. 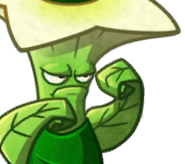 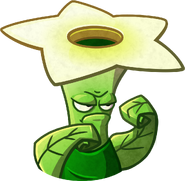 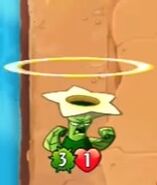 Sonic Bloom on the advertisement for the Early Access Bundle

Sonic Bloom being the featured card in the menu for the June 6th, 2017 Template:PvZHLink

Sonic Bloom on a notification 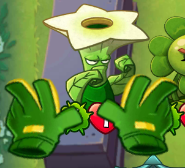 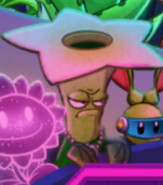 Sonic Bloom on the background of the Galactic Gardens battlefield

Sonic Bloom being the featured card in the menu for the June 22nd, 2017 Daily Challenge

Sonic Bloom being the featured card in the menu for the June 26th,2017 Daily Challenge

Sonic Bloom with the

Two Sonic Blooms on a lane due to Pair Pearadise's ability

Retrieved from "https://plantsvszombies.fandom.com/wiki/Sonic_Bloom?oldid=2172768"
Community content is available under CC-BY-SA unless otherwise noted.