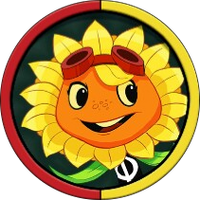 Not to be confused with the Solar Flare Beam, an ability of the Sunflower in the Garden Warfare series.

Solar Flare is a plant hero in Plants vs. Zombies Heroes and the leader of the

Solar classes. Her signature superpower is Sunburn, which does 2 damage to a selected zombie or the zombie hero and gives Solar Flare +1

for the rest of the game.

She is the hero version of Sunflower.

She is based on the plant in Plants vs. Zombies with a similar appearance. Her fiery form and enthusiastic personality may be based on Human Torch, a comic book superhero in the Fantastic Four franchise.

Her name is a combination of "solar," a term relating to the sun, and "flare," a sudden brief burst of bright flame or light, which in turn may refer to "solar flare," a brief eruption of intense high-energy radiation from the sun's surface. Her name could probably allude to Starfire, a DC Comics character, most notably from Teen Titans, or a reference to Solar Flare Beam, an ability for the Sunflower in Garden Warfare series as well.

Her fiery form may allude to the Fire Flower in the Garden Warfare series.

When she's on fire, she's on FIRE. And so are the Zombies.

Solar Flare makes a difference by making lots of sun, which in turn she can use to her advantage by playing high-cost plants and tricks early. Her two classes, Kabloom and Solar, allow her to use aggressive combos of playing lots of plants to dish out huge damage while making enough sun for her to do that. Thanks to the two aforementioned classes, Solar Flare also has access to both

Strikethrough plants such as Laser Bean, allowing for reasonably good direct damage to the zombie hero.

Solar Flare's signature superpower, Sunburn, is what makes her one of the easier heroes to play as. If you get Sunburn as the starting superpower, use it immediately, as an extra sun for each turn after Sunburn is played can make a huge difference. Her other superpowers, on the other hand, are on the defensive side: Weed Whack and Scorched Earth are all about lowering zombies' stats, while More Spore is used to block zombies and swarm the field early on.

Solar Flare is undeniably, the most aggressive plant hero in the game, even more so than Nightcap. Not only can Solar Flare utilize the Pineclone+Molekale strategy like most Kabloom Heroes, she can also combine devastating early-game hitters such as Haunted Pumpking,

Anti-Hero cards such as Poison Ivy, purely high-strength plants such as Zapricot and

Strikethrough plants such as Astrocado together, resulting in an extremely aggressive deck.

Solar Flare can also use heavy control and endless removal cards such as Toadstool, Wing-Nut, Squash, and Berry Blast to dispatch any zombie the enemy hero tries to play. Coupled with massive sun production via cards like Solar Winds and Sunflower Seed, Solar Flare can easily dominate the game with a quick finisher such as Kernel Corn or Cornucopia. Solar Flare can take this a step further by incorporating Imitater, Pair Pearadise, and cards such as Astro Vera into her control decks, making her virtually unkillable.

However, Solar Flare has a few weaknesses: her lack of Amphibious plants, as well as poor anti-gravestone and anti-trick defenses. Although the first weakness can be patched by damaging and instant-kill cards like Berry Blast, Sour Grapes, Squash, and Three-Headed Chomper, she will certainly have to watch out for the latter, because the only way Solar Flare can keep her plants alive for long is to use force, which both gravestones and tricks easily bypass.

Solar Flare also lacks severely in card draw. She could play Petal-Morphosis, Sage Sage, and 2nd-Best Taco of All Time, but the last example is the only reliable option. Instead, she can play Conjuring cards like Cosmic Flower or Cosmic Mushroom, or make multiple plants per card with Shroom for Two, Pair of Pears, Cornucopia, Veloci-Radish Hunter, and the like.

None of Solar Flare's superpowers translate well into the late game, either. More Spore and Scorched Earth are solely for the early game, while Sunburn only does a pitiful 2 damage, and 1 additional sun barely makes a difference if you and your opponent are way too far into the game already. There may be instances where Weed Whack may perform well in the late-game, but thankfully, what Solar Flare lacks in this area she more than makes up for with powerful plants.

Solar Flare is dangerous for her ability to gain sun much faster than any other plant hero. This allows her to play strong cards like Power Flower or Dandy Lion King early, so you should bring cheap cards that can help deal with them like Nibble or Bungee Plumber. A good strategy is taking out plants that generate sun, such as Sunflowers and Metal Petal Sunflowers, as soon as possible, to prevent high-costing cards from being played early.

Alternatively, you can allow the Sunflowers to live while dealing with other cards being played. Tricks like Weed Spray and The Chickening can destroy most of Solar Flare's plants should she have only low-strength or low-health cards on the field. This way you can make Solar Flare run out of cards quickly, giving you an advantage. A prime example is when she uses Berry Angry, which can easily destroy any beefed up Sunflowers. Another way to easily defeat Solar Flare is to play Amphibious zombies on aquatic lanes, since Solar Flare has no Amphibious plants, which allows the player to damage her directly from here. However, do keep in mind that she has access to plenty of damaging and instant-kill cards, which could easily take them out.

You can also play as a hero that specializes in gravestones, since Solar Flare doesn't have many options against them. The only way for Solar Flare to try to stop gravestone decks is Conjuring Spyris from Cosmic Flower.

While Solar Flare possesses many damaging or instant-kill tricks, ironically, she herself is very weak to them, lacking access to anti-trick plants such as Black-Eyed Pea, Brainana, or Forget-Me-Nuts. As such, trick decks are very effective against Solar Flare. Gravestones are also useful, as they are immune to Solar Flare's removal tricks until the next turn, guaranteeing that their abilities will activate or that they will be able to attack at least once.

This deck is based on placing multiple mushrooms with use of Shroom for Two and Mushroom Grotto, then boosting them with Buff-Shroom. If you fail to remove all of them, Solar Flare may end up playing Pineclone, followed by Molekale, to end the game in her favor. Also, you have to beware of Astro-Shroom, who can do damage to you every time a plant is played, and Astrocado, who can do quite some heavy damage to your hero. The Chickening or Weed Spray is recommended to remove the mushrooms.

The best hero to use is Z-Mech, who can use both of the aforementioned tricks and use sheer damage against the stronger plants.

This deck relies on the usage of many flowers, which Solar Flare may start with Blooming Hearts. She will also try to play Solar Winds on empty lanes in an attempt to play Dandy Lion King or Briar Rose early.

Deadly zombies and instant-kill tricks are useful against this deck.

The best hero is Impfinity, who has access to damaging tricks and

Deadly zombies. Since the only instant kill tricks in this deck are two Whack-a-Zombie cards, you would want to use gravestones or play zombies near heights and spread them out due to Solar Flare also having Cherry Bomb.

This deck revolves around early game removal in order for Solar Flare to achieve late game dominance. Gravestones can ignore most of these, but you should defeat Solar Flare quickly since she has Kernel Corn and Cornucopia. Bonus attacks also work since they can heavily damage Solar Flare.

Sour Grapes are also in the deck, so the best hero is Super Brainz due to being able to allow bonus attacks to Gravestone zombies.

Deadly zombies also work since they can destroy any plant regardless of health.

The best hero to go against this deck with would be Rustbolt due to his access to control cards and instant-kills, as well as cheap environments such as Black Hole available to him. Rustbolt can remove Cosmoss with Rolling Stone or Weed Spray if weak enough, or destroy it with Rocket Science if it grows too much.

This is Solar Flare's combo deck of Evolution and Fusion, with some aspects of extra sun production and berry synergy. Solar Flare will start off with Sunflowers (made by Solar Winds and Sunflower Seeds) and Primal Sunflowers, allowing her to step up early to her expensive threats (especially Elderberry (Evolved) and Astrocado who have the

Strikethrough trait) then boost her plants even further with Cro-Magnolia and overwhelm you with Kernel Corn and Cornucopia. Another hazardous thing about this deck is the plants Solar Flare can use for Evolution, aside from Sunflower. Shelf Mushroom is a versatile damaging card that allows her to snipe a threat in any lane (and boost High-Voltage Currant), Eyespore acts as a cheap instant-kill (although fairly limited), while Puff-Shroom is free.

An effective strategy is to destroy as many Sunflowers as you can; while there will still be many options for Solar Flare to use for her Evolution plants, you will be able to stop her from making extra sun and taking control of the game easily. Two of the best heroes that can counter this deck are Z-Mech, who has access to field-clearing cards like The Chickening to clear Solar Flare's setup plants, and Rustbolt, who has Rocket Science and Cut Down to Size to destroy high-strength plants if Solar Flare manages to get some powerhouses out on the field, not to mention that both have access to Rolling Stone and Weed Spray, which are also effective instant-kills.