when a Zombie is frozen.
Zombies are always looking at her with a frozen expression.
Snowdrop is a basic common plant card in Plants vs. Zombies Heroes and a member of the

. She does not have any traits, and her ability gives her +2

every time a zombie receives the

She is based on the plant in real life with the same name.

The word "frozen" in her description has a double meaning. The first means "covered or rigid with ice," referring to the commonly used strategy of freezing zombies to activate her ability. The second means "to stare coldly at someone or to treat coldly," referring to how zombies can only look at plants when they are frozen.

Zombies are always looking at her with a frozen expression.

While she seems weak at first, Snowdrop is a very potent and dangerous plant, and is one of the key plants in a

Freeze deck. As there are many options to

Freeze a zombie, you can boost Snowdrop quite easily.

Each freezing card has their own advantages and disadvantages:

While there are other stat-boosting cards like Grow-Shroom or Berry Angry, it is not as effective as freezing a zombie. However, they are still valid for you to use, in case you don't have any of the aforementioned cards, or if you are short on them. She can also be paired with Winter Squash for devastating effects: when a zombie is frozen, Winter Squash destroys it and Snowdrop will be boosted.

Since Snowdrop is a flower plant, she also works well with Briar Rose and Power Flower, though only Rose can do this normally.

Snowdrop has quite acceptable stats for a 1-sun cost plant, and she can become a very big threat if you are not prepared. If Snowdrop hasn't been boosted yet, play Rolling Stone or Weed Spray. If she has been boosted twice, play Rocket Science or Cut Down to Size. If you don't have the aforementioned tricks, you can play Backyard Bounce to instantly remove all her boosts.

Deadly zombies are also a good counter since they can destroy her regardless of health. However, using zombies to fight Snowdrop is quite risky, as your opponent can play a card to freeze the zombie if they have any, boosting Snowdrop and allowing her to destroy it. Also, don't forget that she can activate Briar Rose or Power Flower's ability due to her being a flower plant. 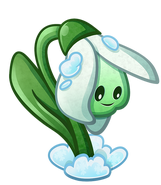 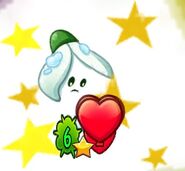 Snowdrop while Pecanolith is on the field

Snowdrop tinted gray due to a glitch

Alien Ooze being played on Snowdrop

Extinction Event being played on Snowdrop

Snowdrop Pack in the tutorial

The player earning Snowdrop after losing a level