Shoot the ice peas that slow the plants!

"We were born like this, it's not terrible" he said calmly, "We are just a pawn in brain chess from beginning to end." No one knows the meaning of his words, and no one wants to go. Understand, after all, who would care about the words of a madman who likes wearing a hood?

For other uses, see Snow Pea.

Snow Pea Zombie (寒冰射手僵尸; pinyin Hán bīng shèshǒu jiāngshī) is a zombie/plant hybrid encountered in Penny's Pursuit in the Chinese version of Plants vs. Zombies 2. Like Snow Pea, he fires frozen peas, but towards the player's plants.

The peas pass above ground plants such as Potato Mine and Celery Stalker. Plants hit by frozen peas are slowed for a few seconds, which is the same status effect that the syringes that Lost Doctor Zombie throws at plants give.

Since its ability only delays offensive plants and ignores certain others, you can use defensive plants to block the attacks and short plants such as Spikeweed to damage it unhindered. 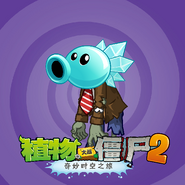 Two Snow Pea Zombies
Add a photo to this gallery

Retrieved from "https://plantsvszombies.fandom.com/wiki/Snow_Pea_Zombie?oldid=2375596"
Community content is available under CC-BY-SA unless otherwise noted.