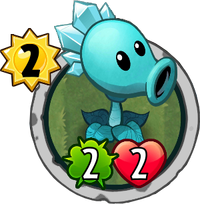 For other versions of this plant see Ice Pea (disambiguation)

When this hurts a Zombie,

Freeze that Zombie.
Learned everything he knows during the Great Freeze Tag Wars of '08.
Snow Pea is a basic common plant card in Plants vs. Zombies Heroes and a member of the

. He does not have any traits, and his ability gives any zombie he does damage to the

Learned everything he knows during the Great Freeze Tag Wars of '08.

Freeze zombies. Even if Snow Pea is destroyed, you can get a free hit on the zombie the next turn because of the

Freeze effect. Your opponent also does not have a good way of countering the

Freeze effect afterward, except for making the frozen zombie do a bonus attack, and even then, it only thaws the zombie.

Snow Pea is also a decent plant for a

Freezing deck with Snowdrop. Or, you can put him a pea deck with The Podfather and Torchwood. (Using only one type of deck is recommended, as pea decks and

Freezing decks do not merge well with each other.)

Unfortunately, since zombies attack first, Snow Pea will get destroyed in combat in most situations, since there are many zombies with 2 strength. This wastes the full potential of his ability. In order to avoid a situation like that, you can make him do a bonus attack as Green Shadow to let him attack first before the zombie in front of him does, or raise his health to survive after being hurt by said zombie. This allows Snow Pea to immediately immobilize the zombie until he is destroyed, or until the

Freeze effect is removed by a bonus attack. Another way of creating the

Freeze chain is to play a card that instantly

Freezes the zombie. This works well if you do not have anything to immediately take care of strong zombies such as Trickster and Zombot 1000.

Cryo-Yeti should be a big threat to him, as he will recieve a boost once he freezes that zombie.

This plant is very hard to deal with in the early game. If he survives after combat, he can continuously whittle down on a zombie without getting hurt himself, due to his ability. This gets more dangerous if used with Snowdrop.

Using a cheap trick or any damaging ability like Rolling Stone is the best way to deal with this plant. You can also make the zombie in Snow Pea's lane do a bonus attack to get rid of the

Freeze effect, or to attack him first before he attacks the zombie. However, if you have neither, it is best to use a zombie with 2 strength or more to minimize the damage since it destroys Snow Pea in one attack, even if it is frozen in the process.

You can also have Cryo-Yeti on the field to make the opponent think twice before playing him, as he will get a boost once he freezes that zombie.

Retrieved from "https://plantsvszombies.fandom.com/wiki/Snow_Pea_(PvZH)?oldid=2326003"
Community content is available under CC-BY-SA unless otherwise noted.