For other versions of this plant see Ice Pea (disambiguation)

Slows down zombies with cold precision

Snow Pea was a plant in Plants vs. Zombies Adventures. He was obtained after the player reclaimed The Post Office Lot. He was used against Rocket Zombie. Its rocket would be removed after getting hit by Snow Pea. Snow Pea could also put out Gas Can Zombie's cigar to prevent its explosion when it dies. Unlike in Plants vs. Zombies, he did more damage than Peashooter. In this game, Snow Pea had a VIP version, which was Ice Queen Pea.

His Facebook page description is the same as his Suburban Almanac entry in Plants vs. Zombies, and his news feed description also features part of the entry in addition to describing his attack method.

Snow Pea shoots frozen peas. He doesn't like it when folks joke about how "cool" he is.

Folks often tell Snow Pea how "cool" he is, or exhort him to "chill out." They tell him to "stay frosty." Snow Pea just rolls his eyes. He's heard 'em all.

The Snow Pea is a particularly helpful plant in the Plants vs. Zombies Adventures environment. He costs only 25 sun more than a Peashooter and is the only regular plant that can slow down zombies. He is a very helpful support-offensive plant, being compatible with every plant, even Flaming Pea. He also helps by being the weakness of Rocket Zombies and Gas Can Zombies.

However, Snow Pea is not perfect and has some technical difficulties. While his projectiles deal more damage and slow down zombies, it is unlikely anything stronger than a Conehead Zombie will KO a Snow Pea only without ZombiFreeze. Ice Block Zombies are immune to Snow Pea's slowdown effect while on their ice blocks, so you may need Flaming Pea to deal with them. This should not deter you from using them, though, as they are very valuable to your arsenal. 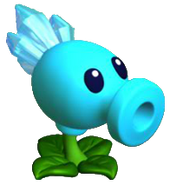 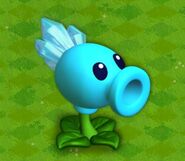 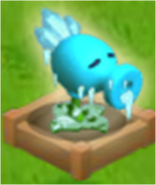 Retrieved from "https://plantsvszombies.fandom.com/wiki/Snow_Pea_(PvZA)?oldid=2208219"
Community content is available under CC-BY-SA unless otherwise noted.