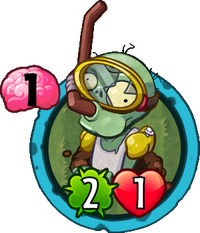 None
Breathing out: check. Breathing in? Not so much.
Snorkel Zombie is a premium uncommon zombie card in Plants vs. Zombies Heroes and a member of the

. It has the Amphibious trait and does not have any abilities. Its closest plant counterpart is Sea-Shroom.

Its description references how its Suburban Almanac entry in Plants vs. Zombies states that zombies don't breathe.

Breathing out: check. Breathing in? Not so much.

Snorkel Zombie is yet another frail zombie that does more than 1 damage, like Pool Shark and Cuckoo Zombie, but has less strength than the aforementioned two. However, due to its Amphibious trait, you can pretty much get some early damage off by playing it on an aquatic lane with less risk of it being destroyed.

But beware, since your opponent may have a cheap Amphibious plant like Admiral Navy Bean or Sting Bean, or a trick like Sunburn or Meteor Strike to destroy it.

Due to it having the Amphibious trait, you need to use an Amphibious plant to counter it that costs equally low like Admiral Navy Bean, or a trick such as Berry Blast to destroy it. If you lack Amphibious plants or damaging tricks/abilities, use Whipvine, Sweet Pea, or Sweet Potato to move it out of the aquatic lane, but with Whipvine, only do that if Snorkel Zombie needs to be moved the most as there may be bigger threats by turn 5.

Retrieved from "https://plantsvszombies.fandom.com/wiki/Snorkel_Zombie_(PvZH)?oldid=2365408"
Community content is available under CC-BY-SA unless otherwise noted.