For a similar zombie in Plants vs. Zombies Heroes, see Snorkel Zombie (PvZH).

Level 3-3
Only appears in the pool
Zombies don't breathe. They don't need air. So why does Snorkel Zombie need a snorkel to swim underwater? Answer: peer pressure.

Big Wave Beach - Day 6
Snorkel Zombie has a hard time getting the Bikini Zombies. He's tried offering them flowers, jewelry, and even chocolate-covered brains. But nothing seems to work. They just can't seem to see past the snorkel on his face.

Snorkel Zombie is the 12th zombie encountered in Adventure Mode in Plants vs. Zombies. The Snorkel Zombie is able to submerge and progress underwater in the Pool, avoiding hits from all plants except for lobbed-shot plants. They will come up to eat any plants in their way, and will submerge again if they destroy it. This is the only time they are vulnerable to normal shots.

The Snorkel Zombie wears a broken snorkeling mask with an orange outlining that exposes its eyes. It has an arm float on its left arm. For its torso wearing, it dons a white colored tank top with a printed design that says "I love Brains!", a red colored pair of shorts as its swimming trunks, and one dark-red colored snorkeling foot fin.

Snorkel Zombie went through a major redesign along with its animation. The Snorkel Zombie now wears an intact snorkeling mask with a white colored outlining. The color of the sides of the snorkeling mask is orange. Its whistle snorkel is colored yellow on the upper part and white on the lower part respectively. He does not wear anything on his torso and he wears a red colored shorter version of the swimming shorts of his first variation, except he now has white linings on its sides. His snorkeling foot fins are now colored yellow.

Snorkel Zombie has a hard time getting the Bikini Zombies. He's tried offering them flowers, jewelry, and even chocolate-covered brains. But nothing seems to work. They just can't seem to see past the snorkel on his face.

Modern Day: Days 23, 33 and Highway to the Danger Room (portal only)

Aside from forcing them to come up to eat plants, there are several ways to kill Snorkel Zombies. They can be hit while underwater by or killed by instant kills such as Tangle Kelps, Cherry Bombs, and others. The easiest way to combat them is by placing a Wall-nut, Tall-nut, or Pumpkin on a Lily Pad. When surfaced, they act like regular Ducky Tube Zombies, so they should not be too hard to kill. The player can also use a Snow Pea or Winter Melon to slow them down, although the former can only hit Snorkel Zombie while surfaced.

More often that not, a player encountering Snorkel Zombies for the very first time will die several times before figuring out how to beat them, so it is important to develop a tactic swiftly. Among others, one strategy to beat them without luring them up to eat something is to use a Chomper on top of a Lily Pad. A bit expensive, but highly reusable and works very well. A second strategy is to simply use a Squash on a Lily Pad. Even cheaper is using a Lily Pad on its own, although the Snorkel Zombie would eat it very quickly. This would work best if the player has high firepower, and can take it out in the short space of time that the Snorkel Zombie surfaces. The easiest way to achieve that would be with multiple Peashooters, Repeaters, Gatling Peas, or Snow Peas, possibly going through a Torchwood (though not Snow Pea, as Torchwood would negate the frozen effect). Multiple Lily Pads would make this strategy more effective.

Another strategy is to use at least one catapult plant on the pool areas, as they can attack this zombie even if it is submerged. It is also a cheaper way to deal with them while getting the Don't Pea in the Pool achievement.

In the mini-game Zombiquarium the player spends five sun to feed them brains (up to three can be in the tank at a time) to the Snorkel Zombies, which produce sun in turn. The player can also use sun to buy more zombies or to buy the trophy and win the level. Just make sure to feed the Snorkel Zombies every couple of minutes; to tell when they are hungry, the player can keep a brain floating in the tank and wait until they swim towards it. They will turn green when they get hungry, and will die if the player do not feed them quickly.

The player can also take advantages of playing this level to get the achievement Sunny Days, which requires the player to produce 8000 sun.

The Snorkel Zombie acts the same way as it does in the first game. Like in the first game, use any lobbed-shot plant, a Chomper, any defensive plant or any instant-kill plants to kill it. It is best to use Plant Food on the player's Kernel-pults to stun them when eating the player's defensive plants and also Melon-pults (including the Winter Melon) to deal multiple hits on this zombie, even if the player sees many of them in a lane. In addition to that, the player can use Bonk Choy by giving it Plant Food to deal multiple jabs on this zombie, even when there are many Snorkel Zombies in the lanes. Ghost Peppers can also kill them while they are submerged. Homing Thistles can target it, as well as the A.K.E.E.s and Phat Beets.

Another strategy is to plant Wall-nuts right before the shore line (the seaweed line), and having Chompers or Toadstools right behind the Wall-nuts. You could also replace Wall-nuts with Pea-nuts or Endurians.

Do not use Plant Food on the straight shooting-based plants against Snorkel Zombie when he is submerged. It will only compound your problems, as Snorkel Zombie will avoid them all. Exceptions are anything that can target low zombies such as Snapdragon's fire and Guacodile's rush attack.

In the Chinese version, Lotuspot can be used to kill Snorkel Zombies easily, as its projectile will float on top of water and will damage it. 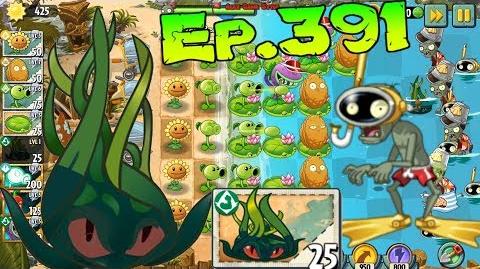 Retrieved from "https://plantsvszombies.fandom.com/wiki/Snorkel_Zombie?oldid=2331461"
Community content is available under CC-BY-SA unless otherwise noted.