Plants and the Plant Hero can't be healed.
When played: All Plants get -1

.
Flowers give her awful allergies and sickening sneezes. Is that why she wears one on her head?
Sneezing Zombie is an event zombie card in Plants vs. Zombies Heroes and a member of the

. She does not have any traits, and her ability prevents all plants and the plant hero from being healed while she is on the field and gives all plants -1

when she is played. This ability persists until all Sneezing Zombies are removed from the field.

She was introduced in update 1.18.13, along with Transfiguration, Go-Nuts, Witch Hazel, Haunted Pumpking, Ketchup Mechanic, Fraidy Cat, Exploding Fruitcake, Unexpected Gifts, and Frankentuar. She is now craftable as of update 1.24.6.

Her appearance resembles a hippie, with glasses and a flower on her head.

Flowers give her awful allergies and sickening sneezes. Is that why she wears one on her head?

This zombie has poor stats for a 4

zombie but has a powerful ability. Similar to Bonus Track Buckethead, she has an ability which can shut down a specialty of the plants side. In this case, she shuts down healing, which is the

Solar class' specialty, making her a good counter against all Solar heroes and their healing card synergies, especially Pepper M.D., Venus Flytraplanet, Heartichoke, Astro Vera, and Aloesaurus. As The Smash, if you are facing Grass Knuckles or Chompzilla, this can shut down both specialties if you use both Sneezing Zombie and Bonus Track Buckethead.

However, her ability is useless against non-Solar heroes as they do not have access to healing cards, with the exception of the

Guardian class, which has Poppin' Poppies for healing. This means that you should not always rely on this zombie as your opponent may not be in either of those classes. Even if they are, their deck may not be focused on healing.

Fortunately, her second ability is quite strong, and allows you to make some use of her should her first ability turn out to be useless. Her ability to give all plants -1

is really powerful against swarms like Puff-Shrooms and glass cannons, essentially acting like a more powerful Acid Rain which slowly clears the field. But as mentioned above, try to not rely on this zombie too much and use her as a supporter instead as she has poor stats for 4

Each Beastly hero has their own way of using her effectively:

Avoid playing her if there are no plants on the field, as her second ability will go to waste.

If you are playing as any Solar or Guardian hero, especially Wall-Knight, be aware if you are going against any Beastly hero as they can play Sneezing Zombie to not only weaken all of your plants but also shut down your healing abilities. Once she is on the field, do not play any cards that has to do with healing like Heartichoke, Venus Flytrap, Pepper M.D., Astro Vera, or Venus Flytraplanet, or if you are a Guardian hero, Poppin' Poppies, as they won't activate their abilities.

You would also want to avoid playing a lot of weak plants on the board, especially if you are playing as a

Kabloom hero, as they will get weaker or be destroyed when she is played.

Thankfully, she does have low stats, so you can play cards that can do 4 damage like Zapricot, two Banana Bombs, or use instant-kills like Whack-a-Zombie.

You could Bounce her so that you can heal yourself once again, but think carefully before doing so if you have many low-strength/health plants, as her second ability can be activated again. 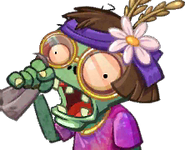 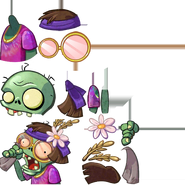 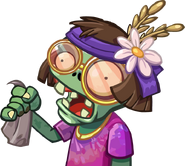 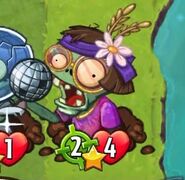 Sneezing Zombie with the 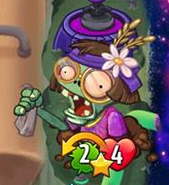 Sneezing Zombie with the

Overshoot trait due to Moon Base Z's ability 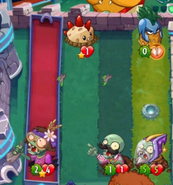 Sneezing Zombie being the featured card in the menu for the October 24th, 2017 Daily Challenge 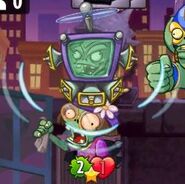