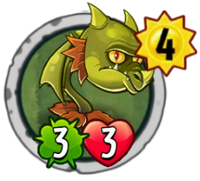 None
"I'm a dragon; I'm a Plant... I'm a mystery!"
Snapdragon is a premium super-rare plant card in Plants vs. Zombies Heroes and a member of the

. It has the Splash Damage 3 trait and does not have any abilities.

It has the dragon wings that Snapdragon gains while its Plant Food effect is active. Its flower tribe is a reference to the fact that a real-life snapdragon is a flower.

Snapdragon is capable of finishing off multiple zombies due to its Splash Damage trait, making it a good plant against swarms of weak zombies. Citron and Beta-Carrotina have the best usage out of Snapdragon due to their large disposal of Team-Up plants and health-boosting abilities. In addition, Citron also has Root Wall and Peel Shield, which are cheap options to make it invincible (compared to Force Field, although only for a turn). Rose can use Snapdragon in a flower deck; combined with Briar Rose, this pair can defeat nearly any zombie. You can also make it do bonus attacks as Green Shadow to immediately remove, or at least wreak some havoc against a zombie in front of it, and since it has the Splash Damage trait, its attack does not fully go to waste even against Gravestone zombies. Nightcap, unfortunately, has the worst use of this plant; he can only increase Snapdragon's base strength.

To utilize its Splash Damage trait to its max potential, you can play it on the 2nd, 3rd, or 4th lane to be able to hit 3 zombies per attack. On the 4th lane, you can take out troublesome zombies on the aquatic lane such as Toxic Waste Imp and Dolphin Rider.

Snapdragon is incredibly dangerous, as not only does it have decent stats, it can damage and even destroy 3 zombies at once. As a worst case scenario, the zombie on the lane to the right of Snapdragon may be destroyed before it gets its chance to attack if it has low health.

You can play instant-kill tricks like Knockout or damaging cards like Electrobolt and Abracadaver. Or, you can lower its strength with something like Shrink Ray or Nibble, but note that splash damage cannot be changed so just supress it with freezing cards or stat degraders.

If you are a

Strikethrough is a great way to destroy it, but Line Dancing Zombie is the only one that can destroy it in one attack.

Retrieved from "https://plantsvszombies.fandom.com/wiki/Snapdragon_(PvZH)?oldid=2326615"
Community content is available under CC-BY-SA unless otherwise noted.