Snap Peas dive underground, burrow towards zombies, then pop up underneath to swallow them in one gulp. Snap Peas then return to their starting spot, chew on the entire matter for a while, and finally spit the zombies' heads out at attackers.

"I'm a picky eater, I'll admit it," admits Snap Pea casually. "I'll eat a zombie, no problem, but there's just something about heads. I feel like they're looking at me."
Snap Pea is a premium plant in Plants vs. Zombies 2, that was first introduced in the 7.1.3 update. It instantly kills a zombie in front of it when planted, then chews for twenty seconds before it spits out the zombie's head, dealing 400 damage per shot to any zombie. If it can't eat a zombie, such as machines or Gargantuars, it will shoot three peas at the zombie. It will then rest for ten seconds before shooting peas again. 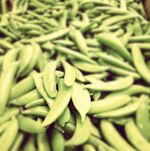 Its appearance resembles a mix between a Peashooter and a Chomper, with the Chomper head being based on a pea pod.

Its name is based on the snap pea, a cultivar group of edible potted peas and is a reference to how it "snaps" (eats) up zombies with its huge mouth after burrowing.

Snap Peas dive underground, burrow towards zombies, then pop up underneath to swallow them in one gulp. Snap Peas then return to their starting spot, chew on the entire matter for a while, and finally spit the zombies' heads out at attackers.

"I'm a picky eater, I'll admit it," admits Snap Pea casually. "I'll eat a zombie, no problem, but there's just something about heads. I feel like they're looking at me."

When fed Plant Food, Snap Pea will burrow underground and snap up five random zombies, and then return to shoot all five heads in its lane, with each head dealing incredibly high damage. If it targets machines or Gargantuars, it will shoot six peas at them instead. If it was already chewing on a zombie, it will shoot one extra head.

When boosted by Enforce-mint, Snap Pea will have an additional 75 DPS added onto the peas it shoots at zombies it can't bite, its chew time will be reduced to ten seconds per zombie, and 1500 DPS will be added to its zombie head attack.

*If Snap Pea cannot eat the zombie, it will instead shoot 3 peas at the zombie.
^Applies to both normal and Plant Food states.

Although Snap Pea is undoubtedly better than Chomper due to the extra projectile as well as the shorter eating duration, Snap Pea nevertheless can still be rather awkward to use. For one, having its eating range be the entirety of the lane is both a blessing and a curse. Although it does give Snap Pea the ability to assassinate zombies from much further away, stopping them before they get a chance to become a threat, the fact that Snap Pea can eat any non-flying zombie in the lane regardless of range means that Snap Pea has the ability to target zombies as soon as they step on the lawn, meaning that the next zombies will come right away, giving any other Snap Peas on the lawn less time to digest their zombies. Additionally, Snap Pea is perhaps the worst "eating plant" when it comes to take down Gargantuars, as compared to the DPS of Chomper and Toadstool, Snap Pea's DPS is pathetic; shooting only three peas that do 90 DPS total, way less than the other two. Because of this, Snap Pea is best used a little bit later in the level compared to the other two plants.

As Snap Pea is an underground plant, Snap Pea is unable to make use of its increased range in Big Wave Beach or Pirate Seas, due to the water/planks respectively. This can be a blessing or a curse depending on the situation. It removes Snap Pea's ability to assassinate from range, giving it range similar to that of a Chomper if placed close to the zombies, which can be beneficial if you intend to stall out the level for an extended period. Additionally, Snap Pea is unable to eat Gargantuars or any mechs in Far Future, so avoid picking Snap Pea in those situations, as Snap Pea is highly ineffective if it is unable to eat something.

Like Chomper and Toadstool, Snap Pea can be used to instantly eliminate zombies that are immune to certain plants, such as Excavator Zombie (immune to straight shots), Parasol Zombie (immune to lobbed shots), and Imp Dragon Zombie (immune to fire damage). Snap Pea is also rather effective against Jester Zombies, as none of Snap Pea's projectiles can be deflected by them.

Due to a lack of area-of-effect damage, Snap Pea must be supported by plants such as Melon-pult. Thanks to Snap Pea's range, it's actually somewhat viable to place it further back in your defense than say a Toadstool or Chomper, making plants such as Snapdragon or Pokra good supportive options for it as well. Blastberry Vine helps by adding both extra protection as well as additional damage, which can help weed out weaker zombies that might be a waste for Snap Pea to eat. Avoid picking Snap Pea in Endless Zones, as Snap Pea is not only highly ineffective versus Gargantuars, but also against hordes of zombies in general.

Snap Pea is highly effective against Zombie Medusa as not only could he eat the zombie entirely, the Medusa Head will also petrify other zombies upon hit.