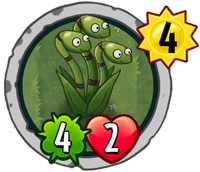 Start of turn: Make another Snake Grass in the lane to the right.
"Snakes. Why'd it have to be snakes?"
Snake Grass is an event plant card in Plants vs. Zombies Heroes and a member of the

to play and have 4

. They have the Amphibious trait, and their ability makes another Snake Grass on the right lane next to them at the start of every turn unless that lane is already occupied by a non-Team-Up plant or two plants, starting from the next turn after they are played.

They are based on the horsetail, also known as snake grass, a plant in the genus Equisetum, the only living genus of Equisetaceae, a family of vascular plants that reproduce by spores rather than seeds, and the grass snake (Natrix natrix), a reptile native to parts of Europe and Africa.

While their name is a combination of "snake" and "grass," it could also be a reference to the phrase "a snake in the grass."

The quote in their description is a reference to Indiana Jones' quote, "Snakes. Why did it have to be snakes?"

"Snakes. Why'd it have to be snakes?"

Snake Grass is capable of filling the lanes very quickly and blocking off zombies from attacking you, and because they have Amphibious, they can even defend aquatic lanes. However, doing so makes their ability useless as the aquatic lanes are usually the rightmost lanes.

As Green Shadow, this card works great with Muscle Sprout because each Snake Grass made will raise its stats. Nightcap can use Snake Grass effectively with Pineclone, making more plants to increase the number of Pineclones transformed, although the only difference between Snake Grass and Pineclone is that Pineclone has a little more survivability at the slight cost of strength. He can also use it in tandem with Astro-Shroom to do 1 unblockable damage to his opponent. Citron and Beta-Carrotina can play a defensive Team-Up plant in front of Snake Grass such as Wall-Nut to protect them and allow them to keep making more Snake Grass if they get destroyed. They can also boost Snake Grass' health, letting them live longer and activate their ability more. You can also boost multiple Snake Grass at the same time with Navy Bean as they have the Amphibious trait, giving all of them +1

However, Snake Grass has a few drawbacks, most notably their lack of the Team-Up trait. This means that they can easily take up space and prevent you from playing any other non-Team-Up plants there. They also have underwhelming health, which is in the range of getting destroyed by Bungee Plumber or The Chickening. Still, Snake Grass will ensure that you can keep the lanes full, and if combined with Muscle Sprout or stat-boosting cards like Storm Front, Navy Bean, or Berry Angry, can be very deadly against unprepared opponents.

Snake Grass can be an annoying plant to face due to their multiplying capabilities. if you do not have enough zombies, you can end up taking a surprising amount of damage, and if your opponent has cards that either benefit from, or benefit multiple Snake Grass, it will only get worse. Therefore, you should destroy Snake Grass before they can activate their ability by playing damaging cards like Bungee Plumber and Zombot's Wrath, or by moving zombies in front of them with tricks such as Smoke Bomb and Beam Me Up.

Strikethrough zombies are handy if there are any Team-Up plants in the way of Snake Grass.

If there are too many Snake Grass on the field, the best way to take out all of them at once is to play cards that harm multiple plants on the field to destroy all Snake Grass at once. Notable examples include The Chickening, Extinction Event, Supernova Gargantuar, and Gizzard Lizard.

Retrieved from "https://plantsvszombies.fandom.com/wiki/Snake_Grass?oldid=2351960"
Community content is available under CC-BY-SA unless otherwise noted.