.
Good for eluding the enemy. Bad for the lungs.
Smoke Bomb is a basic common zombie trick card in Plants vs. Zombies Heroes and a member of the

to play, and its ability moves a selected zombie onto a selected lane and gives it +1

. Its closest plant counterparts are Bubble Up and Gardening Gloves.

It is based on the object in real life with the same name and purpose: To confuse the enemy and utilize their confusion to one's advantage.

Its description is a reference to how inhaling too much smoke can cause lung problems.

Good for eluding the enemy. Bad for the lungs.

Smoke Bomb can be used to move powerful zombies, especially

Anti-Hero zombies, into empty or poorly defended lanes. Additionally, the fact that the moved zombie gets +1

makes this trick even more useful. This allows the zombie to either do a good amount of damage on whatever is on there, save itself from any attacks on its previous lane, or both.

Smoke Bomb is also a good card to use in trick decks since it is cheap and can be played in most situations. It is mosy suited in rush and aggro decks due to the fact that they tend to win the game early and will therefore ensure the smoke bomb is utilized at it's maximum potential.

If you play as Super Brainz, consider trading this out for Super Brainz's signature superpower, Carried Away. Both do relatively the same thing by moving a zombie, but Carried Away lets it do a bonus attack, which is more useful than +1

in many cases. However, Carried Away is more limited in terms of obtaining it, so Smoke Bomb should be your main source of moving zombies, if needed.

Smoke Bomb can save a zombie you thought you would surely destroy, and allow it to hit harder. Space Cowboy, as well as other zombies with either high strength or the

Anti-Hero trait will most likely be the primary targets, so it is worth prioritizing on taking them down first.

As for its counters, there is not much aside from swarming the field with as many plants as you can. You can also track the zombie down with Corn Dog, although Corn Dog will surely be destroyed. Or, since it is a trick, Forget-Me-Nuts, Brainana (disables tricks for a turn), or Dark Matter Dragonfruit can discourage or prevent your opponent from playing it; however, Forget-Me-Nuts is only useful in the early game, while the latter two cost pretty high and are unable to stop an early-game Smoke Bomb. 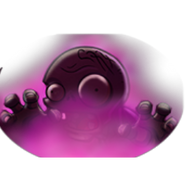 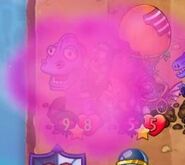 The player having the choice between Smoke Bomb and Sunflower as the prize for completing a level
Français
Community content is available under CC-BY-SA unless otherwise noted.
Advertisement