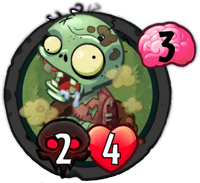 None
Casual acquaintances don't understand where his pets are. They don't realize that stinkflies can be such tender little friends.
Smelly Zombie is a basic common zombie card in Plants vs. Zombies Heroes and a member of the

. He has the Gravestone and

Deadly traits and does not have any abilities.

Casual acquaintances don't understand where his pets are. They don't realize that stinkflies can be such tender little friends.

Smelly Zombie can be considered the most "standard," yet more useful of the

In most cases, Smelly Zombie is more suited in attacking plants compared to your opponent themselves due to his low strength. Playing him in front of a strong plant like Super-Phat Beets, Cornucopia, and the like will guarantee destruction of the plant if he successfully hurts the plant (usually at the cost of Smelly Zombie himself though). And because he has 2 strength, he is able to destroy

Armored plants like Jugger-Nut, Tough Beets, and even Soul Patch too. Speaking of Soul Patch, you do not have to hit him directly to destroy him; due to his ability, Soul Patch will redirect the

Deadly damage to himself if your opponent gets attacked, instantly being destroyed unless shielded. And since he comes out from a gravestone, your opponent will not be able to counter this zombie entirely until the next turn, with the exceptions of Grave Buster, Blockbuster, and Cool Bean, though the chances of your opponent having him all the time may not be high.

His Gravestone trait also allows for some potential mix-ups for Super Brainz, Huge-Giganticus, and Impfinity, as they have plenty of Gravestone zombies that also cost 3 brains, and potentially serve as bait. For instance, your opponent could suspect something like an Abracadaver or a Jester in a gravestone, only to find out it was Smelly Zombie, essentially wasting their powerful plant. If your opponent manages to predict your play and plays their plant elsewhere, you may move Smelly Zombie with Smoke Bomb or Carried Away (as Super Brainz) to track it down.

Neptuna and Brain Freeze may not be able to fool their opponent due to the lack of Gravestone zombies, but they can play stat-boosting cards to keep Smelly Zombie alive for longer. Also, Neptuna can give him the

Frenzy trait, allowing Smelly Zombie to destroy any plants hiding behind tough walls (assuming Smelly Zombie survives both attacks, which Neptuna can do via shielding cards) or move plants to him, while Brain Freeze can put him in a pet deck with Zookeeper and Cat Lady.

Smelly Zombie has a bulky health stat of 4. Not only that, he has the Gravestone trait, making him invulnerable to many tricks until revealed. And the worst part is his

Deadly trait, which makes it generally unappealing to play your strongest plant to deal with him, as that plant will be destroyed too unless shielded.

If you are facing a

Sneaky hero, take caution if they play a Gravestone zombie. If possible, play Grave Buster or Blockbuster to get rid of him or Cool Bean to

Freeze him. If you have Winter Squash, you can use it to destroy him while he is frozen. When he has emerged,

Freeze him, then use an offensive plant to destroy him. If you are desperate to destroy him, use Sizzle or Squash to aid you. Chomper's ability will also easily defeat this zombie. 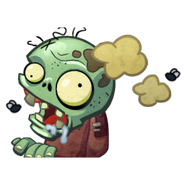 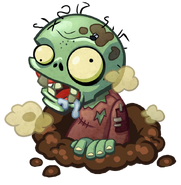 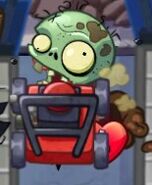 Lawnmower being played on Smelly Zombie 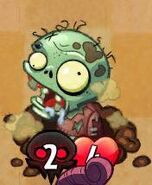 Gigantic Smelly Zombie due to a glitch

Smelly Zombie with a star icon on his strength 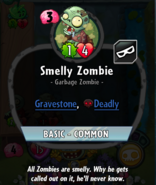