None
Sure, he and Squash are pals. But there's always an undercurrent of competition between them.
Smashing Pumpkin is a basic common plant card in Plants vs. Zombies Heroes and a member of the

. He does not have any traits or abilities. His zombie counterpart is Copter Commando.

He is based on a pumpkin, a round vegetable with smooth, slightly ribbed skin, and deep yellow to orange coloration. His mouth looks like one found in a jack-o-lantern, which is made by carving a pumpkin.

His name is a combination of "smashing," referring to the way he attacks, and "pumpkin," the real-life plant he is based on. It could quite possibly also be a reference to an American alternate rock band with a very similar name.

Sure, he and Squash are pals. But there's always an undercurrent of competition between them.

Compared to other 6-sun plants, Smashing Pumpkin has no traits or abilities, but makes up with sheer strength. You can mass up more sun to play and play more Smashing Pumpkins more quickly.

Smashing Pumpkin also faces severe competition against other 6-sun plants like Three-Headed Chomper, Gravitree, and Super-Phat Beets, all of who always outperform him for the same price.​​​​​​ If you are playing as Solar flare, try to use Grapes of Wrath instead, as they have tribe synergy and 1 more health as well as a strong ability for just 1 more sun.

Smashing Pumpkin hits very hard and is quite bulky, destroying or heavily damaging you or your zombies. It is best to destroy him with a trick like Rocket Science, Cut Down to Size, Locust Swarm, or B-flat, or use cheap

If he is in an environment or on the heights lane, Alien Ooze can destroy him. You can also make zombies with 5 strength or more do a bonus attack (such as Trickster). 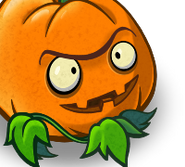 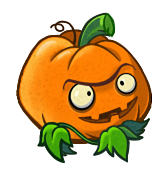 Smashing Pumpkin as the profile picture for a Rank 39 player 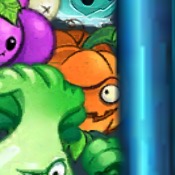 Smashing Pumpkin in the Multiplayer menu 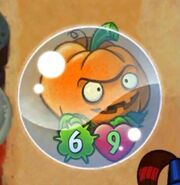 Bubble Up being played on Smashing Pumpkin 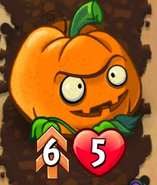 Smashing Pumpkin with the 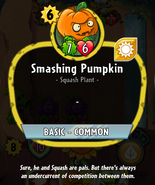 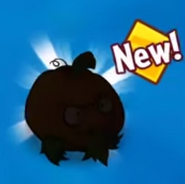 The player receiving Smashing Pumpkin from a Basic Pack

Smashing Pumpkin on the title screen

Smashing Pumpkin as the profile picture for a Rank 39 player