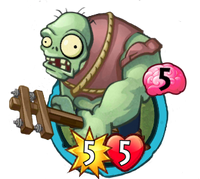 Frenzy.
When he phones home, it means something completely different.
Smashing Gargantuar is a premium rare zombie card in Plants vs. Zombies Heroes and a member of the

. He does not have any traits, and his ability gives all Gargantuar zombies on the field, including him, the

Frenzy trait. This ability persists until all Smashing Gargantuars are removed from the field.

His description is a reference to the movie E.T. the Extra-Terrestrial and its famous quote, "E.T., phone home," which can also mean to call friends or family at someone's house. It is also a joke on how Smashing Gargantuar uses a telephone pole as his weapon.

When he phones home, it means something completely different.

Smashing Gargantuar himself has decent stats, in addition to his

Frenzy trait. He is strong enough to clear a lane of plants that have less than 5

, and then strike your opponent. Combined with other Gargantuars on the field, the devastation he causes gets even more massive.

Since the Beastly class has the most Gargantuar zombies out of the zombie classes, Smashing Gargantuar synergizes well with every Beastly hero. For example, The Smash can use this with Gargologist, which lowers the cost of this zombie so he can be played earlier to put pressure on your opponent. However, be sure to carry some early-game cards. He also has access to most gargantuars in the game, making him even more effective.

Keep in mind, however, that all Gargantuars are vulnerable to Doom-Shroom unless one's strength has been lowered, so using this along with other Gargantuars against a

Guardian hero is quite risky, as they may have Doom-Shrooms in their deck. Such a deck is also weak to Shamrocket which can destroy a single Gargantuar at a cheaper price without risking their own defenses, so be aware. Of course, Solar heroes also pose a great threat with their instant kills. Immortica, however, can use Parasol Zombie to make Smashing Gargantuar and his allies untrickable, preventing tricks from defeating them instantly.

For an easy reference, here's all Gargantuars that can benefit from Smashing Gargantuar:

Hearty (The Smash only)

Also, note that not all Gargantuars benefit from Smashing Gargantuar's ability, as there are Gargantuars that already have the

Frenzy trait, namely Wannabe Hero, King of the Grill, and Supernova Gargantuar. So if you don't think Smashing Gargantuar's ability would be very effective, then Supernova Gargantuar is the better alternative to him as he has more health and a powerful ability to remove multiple plants at once. But otherwise, if he is needed, do not hesitate to play him.

Smashing Gargantuar is a very dangerous zombie, but there are plenty of ways to easily take care of it. You can play Squash or Lawnmower to get rid of him, or even better, Doom-Shroom, since it destroys all Gargantuars at once compared to the former two. If you are going to play Doom-Shroom, however, it is recommended to see if you have any plants with 4

or more on the field, as they will also get destroyed from it. You can also play Shamrocket to get rid of him for a cheap cost.

Plants with at least 5

can also easily destroy this zombie. However, the zombie hero won't easily let anyone get away with that so watch out for zombie tricks.