When played: Your Nuts get +2

.
Smackadamia wasn't born with smack smarts. He studied hard. He's a smackademic.
Smackadamia is a premium rare plant card in Plants vs. Zombies Heroes and a member of the

He has the Amphibious trait, and his ability gives all nut plants on the field, including him, +2

He is based on the macadamia, a commercially important nut that is indigenous to Australia.

His name is a portmanteau of "smack," referring to the way he attacks zombies, and "macadamia," the real-life plant he is based on.

Smackadamia wasn't born with smack and smarts. He studied hard. He's a smackademic.

Not only does this plant have decent stats and the Amphibious trait, his ability makes a nut-based deck even more defensive (and patching the low health of some nuts like Forget-Me-Nuts and Three-Nut). If possible, try to fill the entire field with nut plants.

Using this with Mirror-Nut is a good idea, since Mirror-Nut will have more opportunities to damage your opponent as the nuts can take more hits. Navy Bean can boost Smackadamia due to his Amphibious trait, but Navy Bean isn't recommended in a nut deck due to Smackadamia and Water Chestnut being the only Amphibious nuts in the game. For an easy reference, here's all Nut plants that can benefit the ability.

Smarty (Citron and Beta-Carrotina only).

Smackadamia is best destroyed in one hit due to the high possibility of there being at least one Mirror-Nut to punish weak attacks, although it is no easy task due to his Amphibious trait and high health.

While there are several Amphibious zombies that can destroy him in one hit like Toxic Waste Imp and Deep Sea Gargantuar, such zombies are usually only available to the

Beastly classes. (Squirrel Herder can also destroy him at once, since he is a nut.) So if you don't have any, move him out of the aquatic lane, or destroy him with damaging tricks/abilities or Rocket Science. 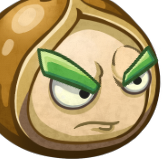 Gigantic Smackadamia due to a glitch 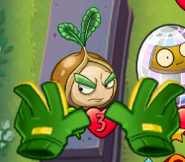 Gardening Gloves being played on Smackadamia

Smackadamia's statistics (after being Conjured by Cosmic Nut)