He's tried everything: bunts, grand slams, even sliding into home head-first. But nothing gets the crowd from "terrified screaming" to "applause."
Slugger Zombie is a Ballpark Frank minion Zombie in Plants vs. Zombies 3. Once he has appeared on the field, he will stay in place and hit baseball gloves at a random plant in his lane. If there are no more plants on his lane he will act like a Browncoat Zombie, proceeding across the lawn.

His appearance might be based off Baseball Zombie from previous games. However, his ability might be taken by Catapult Zombie from the first game of the franchise.

Slugger Zombie is not that tough to defeat on his own, instead assisting other zombies and acting similarly to Catapult Zombie from Plants vs. Zombies. If plants are being damaged significantly by him, Aloe Vera is recommended to heal those damaged plants. Bamboo Shoots works well against him, both being effective against Slugger Zombie's Earthy damage type and easily destroying his armor. Kernel-pult or Buttercup can stun him; note that Buttercup will need to be hit by a glove to trigger her effect. Keep in mind that Electric type plants will take extra damage from his baseball gloves, making them less than optimal choices against Slugger Zombie.

If his Mega counterpart appears on the field, more plants will be damaged, as he will bat three baseball gloves at three random plants. Once again, Aloe Vera can heal damaged plants in 3x3 area around her, covering most of Mega Slugger Zombie's range. Heavy hitters such as Squash and Potato Mine can also help wear him down significantly.

Slugger Zombie's icon in the Pre-Alpha 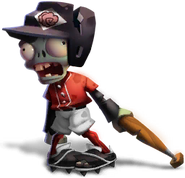