A money bag
Slot Machine is the third mini-game in Plants vs. Zombies, Plants vs. Zombies: Journey to the West, and Plants vs. Zombies: Great Wall Edition. It is available to play once the mini-games are unlocked. The gimmick of this level is that instead of placing plants in a normal fashion, a slot machine deploys the player's artillery. The machine can dispatch seed packets for Peashooters, Snow Peas, Sunflowers, and Wall-nuts. Thus, this mini-game is a form of gambling as luck is heavily involved. It costs 25 sun to spin the slot machine. If the player survives four large waves of zombies, an endless barrage of zombies will infiltrate the lawn. This will continue until the player collects 2000 sun, and thus completing the goal of the mini-game. 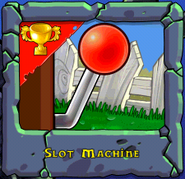 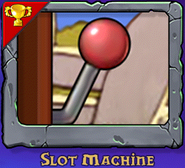 As mentioned before, to complete the level, 2000 sun must be collected. However, the sun must be spent eventually to activate the slot machine. Postponing its activity is futile, as a horde of zombies will approach while the player hoards sun. Matching two of a plant on the slots awards one seed packet and three of a kind produces three packets. Matching diamonds can either create one or three diamonds and matching sun icons will either produce 100 or 500 sun.

This mini-game has a relatively simple strategy: simply plant Peashooters, Snow Peas, and Sunflowers mixed together in the back, and create a barricade of Wall-nuts in front. The player may have trouble to begin with, depending on their luck, but it gets easier the further they advance, as there are only a couple of zombie types to contend with. Eventually, there will be more and more zombies approaching at one time, so if the player is trying to earn money by preventing themselves from winning and attempting to get diamonds, they may have to win so that hordes of zombies getting past their defenses will not make them lose. Note that any used seed packets will disappear if not planted after a certain amount of time. The seed packet will flash to a darker tint when it is about to do so, signaling that it should be used quickly. Also, Wall-nut First Aid which is available in Crazy Dave's shop for $2000 after completing Adventure Mode will both buy time and save the other plants. It is recommended that the player does not use this strategy until a Wall-nut has reached its second and final stage of damage. This is not always possible, as the seed packet will eventually disappear if not used. If so, you can always plant it in front of or behind another Wall-nut.

The lawn abstinent of plants at the start of "Slot Machine"

Two Peashooters and a falling sun

A Zombie Yeti on Slot Machine

Two diamonds and a Sunflower

The grip of the slot machine handle 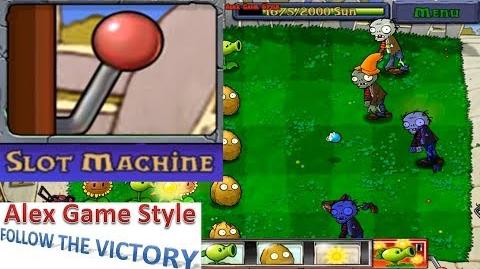 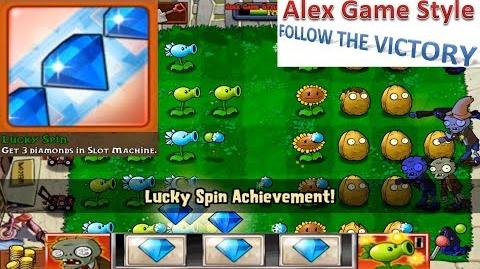 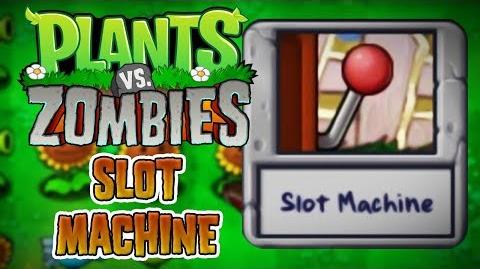 Retrieved from "https://plantsvszombies.fandom.com/wiki/Slot_Machine?oldid=2301863"
Community content is available under CC-BY-SA unless otherwise noted.