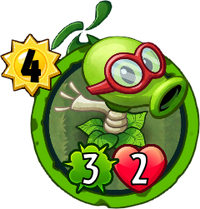 When played on Heights: This gets +2

. It does not have any traits, and its ability gives it +2

when it is played on the heights. Its closest zombie counterpart is Mountain Climber.

It is based on the plant from Plants vs. Zombies with a similar appearance, and a pilot, a person who controls the flight of an aircraft.

Its name is a portmanteau of the words "sky," referring to its appearance and ability, and "Peashooter," the Plants vs. Zombies plant it is based on.

Skyshooter can be a good alternative to Cabbage-Pult from mid to late game, as its sun cost is too high in the early stages. However, as the game progresses, the opponent might have stronger fighters and tricks to destroy this plant easily. Although, it might come in handy when the opposing hero has nothing to counter this up, as its ability to increase stats when played on heights and in tandem with Torchwood, with its ability to increase strength for pea plants.

Being a pea plant, combining this with The Podfather can give this plant an even higher amount of strength and health, on top of Skyshooter's boost from being planted on heights. With Lily of the Valley on top of the boosts from The Podfather and Skyshooter's ability, it ends up with a monstrous stat of 9

right after it is played.

Since its ability only activates when it is played on heights, you can play Gardening Gloves to move a plant from the heights to make room for another Skyshooter, or move it after its ability has activated. However, only Grass Knuckles can do this normally.

This plant can potentially be a big threat, especially if used with Torchwood, Lily of the Valley, or The Podfather. Using Cakesplosion can take this plant out even if it is played on the heights. Cuckoo Zombie also will take this out with one hit, even when on heights. You can also play cards such as Sumo Wrestler, Rodeo Gargantuar, or Terrify to move a plant onto the heights to prevent Skyshooter from activating its ability. As a last resort, you can also play Rocket Science, Cut Down to Size, Alien Ooze, or Locust Swarm to instantly destroy it. Z-Mech cannot really do much with this if it is boosted. There is always Stupid Cupid, however, which can reduce Skyshooter's strength to 0 for one turn.

Retrieved from "https://plantsvszombies.fandom.com/wiki/Skyshooter?oldid=2299313"
Community content is available under CC-BY-SA unless otherwise noted.