View source
watch 01:17
Owen is on Fire with Sky Trooper Plants vs. Zombies Garden Warfare 2 Live From PopCap
Do you like this video?
Play Sound

After losing his qualification as a section leader three times the Sky Trooper finally earned his wings. Unfortunately, his ego writes checks his body can't cash.

With his ultra-fast rate of fire, Sky Trooper is ready to take you to the danger zone.

The Danger Zone is the primary weapon of the Sky Trooper. The facts below apply to a fully upgraded weapon.

Finally passed the Zomboss Pilot Academy with flying colors. Can reload faster than ever!

He loaded up with more payload before takeoff, increasing his ammo.

This ammo breaks the sound barrier, increasing the damage on impact.

The Sky Trooper's primary weapon is similar to the Foot Soldiers, but it exchanges ammo capacity for an extreme rate of fire. As standard for most Foot Soldier Variants, both high vantage points and proper aim are important things to master with the Sky Trooper. The Sky Trooper can deal damage faster than the Foot Soldier, but actual vanquishes might take longer if your opponent is very mobile. Use the Zombie Stink Cloud to force opponents into places where you can easily shoot them. 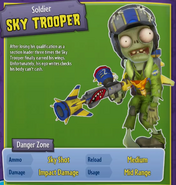 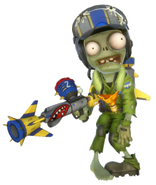 Sky Trooper with Landscaper, Archaeologist and Wrestling Star in Zomboss Down Pack trailer 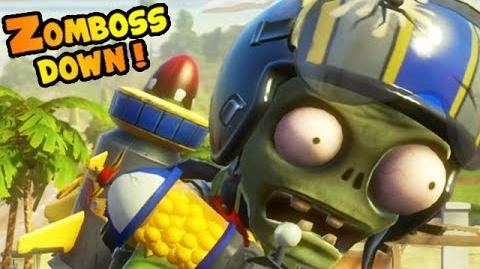