Sky City - Day 9 is the ninth level of Sky City in the Chinese version of Plants vs. Zombies 2. This level introduces the Missile Zombie. When this level is finished for the first time, the player gets coins.

In normal mode, the player has to beat the zombies at level 1.

This level marks the introduction of the Missile Zombie. While you can't hurt it with plants, you can destroy it with fingerswipes. Just like with Day 7, Double-Cabin Aircraft Zombies are present, however they appear infrequently compared to that level. Thunderstorms are also present in this level, meaning that choosing Ampthurium is a must. With all that being said, the player should bring strong offensive plants to defeat the level.

In hard mode, the player has to defeat leveled-up zombies.

Despite the fact that the zombies are upgraded, the amount of swipes Missile Zombies take doesn't actually change. With that in mind, the player only needs to worry about Double-Cabin Aircraft Zombies. Upgraded plants or strong level 1 plants like Cattail should take care of them with ease. 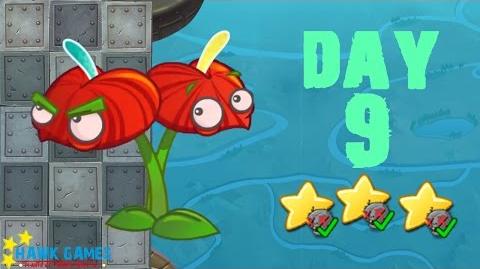 Retrieved from "https://plantsvszombies.fandom.com/wiki/Sky_City_-_Day_9?oldid=2173419"
Community content is available under CC-BY-SA unless otherwise noted.