Sky City - Day 6 is the sixth level of Sky City in the Chinese version of Plants vs. Zombies 2. When this level is finished for the first time, the player gets Cycloque. The Lightning Gun Zombie makes his first appearance in this level.

Control a cannon and defeat zombies to reach the target score

The point of this Brain Buster is relatively simple. Use sun to defeat zombies, and defeated zombies grant more sun (and points). Once you run out of sun, you lose. The target goal is 10,000 points, which should not take very long. The player has two attacking methods, a cannon shot and a laser beam. Use these two attacking methods strategically. Some zombies have different movements as others. For instance, Zombie Fighters move fast and quickly, while Lightning Gun Zombies move diagonally. Double-Cabin Aircraft Zombies that glow green, when defeated, will cause a lightning storm. When this happens, quickly use any weapon as fast as you can, as no sun is spent during this state. There are no waves, so the player can go as fast or slow as they want to.

Control a cannon and defeat zombies to reach the target score

Hard Mode adds in new zombies and a new attacking method, which is a missile barrage. This will defeat many ordinary zombies in one shot, so use this when there are many zombies on screen in a group. 25,000 points are needed to win this time, which can take at least 5 minutes. Double-Cabin Aircraft Zombies now do not cause a lightning storm, so the player cannot rely on them. Flying Gargantuars will scare off all zombies on screen in an event. This happens numerous times, and the player is not forced to defeat it. Do not attempt to defeat this if you don't have at least 4000 sun, as this has a lot of health, and attempting to defeat it can result in a loss if you do not have enough sun. However , when you have enough sun, attacking him with the basic cannon will easily kill him. In return, the player gets a huge amount of points, as well as 2000 sun, almost refunding what it took to defeat it. Taking your time is key in this level. 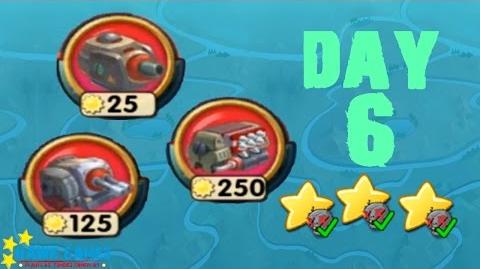 Retrieved from "https://plantsvszombies.fandom.com/wiki/Sky_City_-_Day_6?oldid=2262581"
Community content is available under CC-BY-SA unless otherwise noted.