Sky City - Day 4 is the fourth level of Sky City in the Chinese version of Plants vs. Zombies 2. When this level is finished for the first time, the player gets coins.

The zombies are the same as the previous two levels, so do the same as you would from Sky City - Day 2. In addition, the player has received the cannon of the ship, which will aid them in defeating zombies.

Zombies at levels 3-4 are now present. The player should upgrade their plants for a clear shot at victory.

The zombies can be level 4, which can be troubling without a level 4 plant. It's suggested to level up some plants before trying to take on this level on hard mode. The cannon of the ship will not do as much damage as before, due to the zombies having elevated health, so keep that in mind. 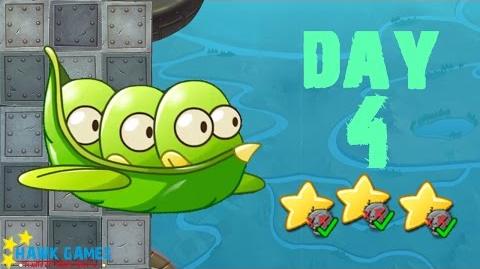 Retrieved from "https://plantsvszombies.fandom.com/wiki/Sky_City_-_Day_4?oldid=2173166"
Community content is available under CC-BY-SA unless otherwise noted.