Sky City - Day 1 is the first level of Sky City in the Chinese version of Plants vs. Zombies 2. When this level is finished for the first time, the player gets Rotobaga.

Coins
In Normal mode, the player has to beat the zombies at Level 1.

(Crazy Dave and Penny appear)
Crazy Dave: Woah! Where are we? I feel like I'll be blown away!
Penny: Data shows that we are 11045 meters from the ground.
Penny: Maybe we can find something special here.
Crazy Dave: I have acrophobia! Ahhhh! I need to get inside. We won't find anything way up here anyway.
Penny: My detector shows the opposite.
(Crazy Dave and Penny leave)

Crazy Dave: Only flying plants can be planted at the open sky outside of the deck.
Crazy Dave: When being attacked, the durability of the ship will decrease. You lose when the durability runs out, so protect the ship.

N/A
In hard mode, the player has to defeat leveled-up zombies. 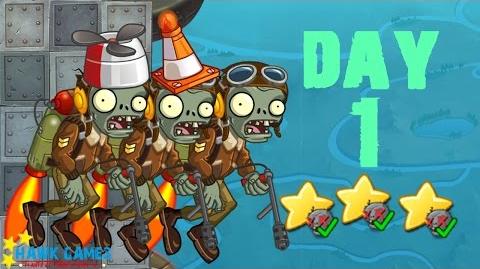 Retrieved from "https://plantsvszombies.fandom.com/wiki/Sky_City_-_Day_1?oldid=2369622"
Community content is available under CC-BY-SA unless otherwise noted.