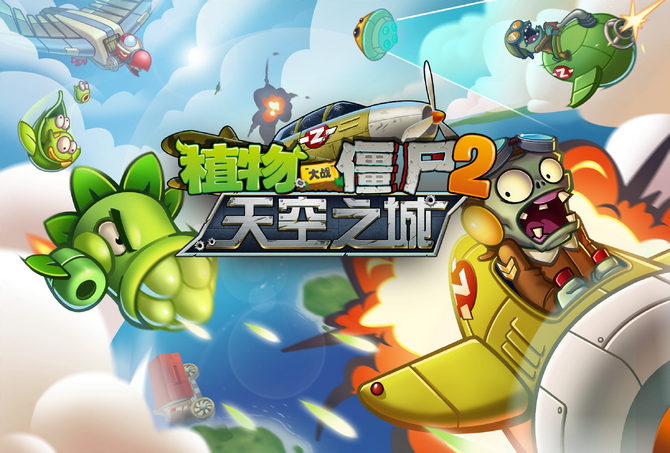 Obtaining stars or 58 diamonds
Sky City (天空之城; pinyin: tiānkōng zhī chéng) is the 9th world in the Chinese version of Plants vs. Zombies 2 and second Chinese-exclusive one. The main feature of this world is that zombies will no longer rush into the player's house, but instead, they will attack Crazy Dave's ship until it is completely destroyed.

The health of the ship is displayed to the left of the level progress bar. The ship has a cannon that targets zombies automatically. There is a new power-up to the right of the Tactical Cuke that briefly controls the cannon by firing a lot of bullets where it is aimed to, but it has a cooldown time.

If both are positive charges they will deal continuous damage on the plant until it dies; if both are negative charges, they will totally stun the plant, and if they are mixed they will cause the plant's attack speed to reduce by 50%. However, Ampthurium can absorb the bolts without being affected, turning them into damaging projectiles. It also reverts other plants to normal if two plants within a 3x3 radius of it have matching charges, as well as through using its Plant Food ability.

While it is unknown which time period this world is based on, it appears to be based on a depiction of World War III, as the game has revealed that it is based on the US Air Force. Since jetpacks were invented after World War II, it means that it takes place after Modern Day and before Far Future.

This is a vast endless sky. Clouds there are filled with dangerous lightning. Zombies are driving all kinds of dangerous weapons. You will meet an unprecedented challenge. Watch out or you will be gunned down!

This is an extremely difficult world. The main reason is the fact that there's no Lily Pad/Flower Pot-like plant that allows you to place non-flying plants in the sky, heavily restricting strategies. The lightning gimmick can weaken your defenses quickly, and the unique zombies are not a cakewalk either.

Air Raid is incredibly hard, and Across the Lawn is extremely long and difficult. However, One Gun Guard is very easy. The boss, the Zombot Vulture Fighter is extremely difficult to beat due to summoning powerful zombies and conducting powerful attacks that can easily destroy many plants at once. The player should not unlock this world until they have themselves enough leveled-up plants.

One Gun Guard is the first exclusive Brain Buster in this world. In it, the player controls a machine which fires lasers at the synchronized patterns of flying zombies. The goal is to gain enough points to pass the level, and in that sense, it is similar to Cannons Away, but it does not have a progress bar so you can shoot as many zombies as you want and aim for the best moment for shooting the most zombies. The player will lose if they have no sun left.

There are 2 guns that cost 25 and 125 sun each. In the Hard version of each level, there is an additional gun which does damage to multiple targets that costs 225 sun.

Air Raid is the second exclusive Brain Buster in this world. Players can choose between three plant teams. If the player collects a certain amount of points during a level, the plant upgrades by itself. If the player does not have at least one plant in a team, then this team is not available (though Team Pea is always available).

Main article: Across the Lawn

Across the Lawn is the third exclusive Brain Buster in this world. Its concept is extremely similar to Fright Theater. The main change is that now there is a trail of arrows representing the path where zombies go and it can be changed by placing wooden boxes.

However, they can only be placed on determined tiles and cost 100 sun each. The rest is almost the same. The player has to place certain plants already chosen on metal and wooden crates and upgrade them with sun that every zombie drops to get ready for menacing zombies with enormous quantities of health without letting them reach the end of the pathway. There is also a limit of how many zombies can get to the goal, and the level is lost when that limit is exceeded.