I need my TIME MACHINE!
Ski Zombie is a conjectural name for this article.
If you know the official name or have a better name or
translation for it, please contact a wiki administrator to change it.

(When in air after jumping)

Ski Zombie likes challenges and adventures, and wishes to become like the performers that he saw when he was young, taking off from a small slope, doing all sorts of complex movements, then landing safely. So when he had grown up, he tried -- But he was too young and did not see a sign in front of the stage; "Dangerous act, do not mimic..."

Ski Zombie (滑雪僵尸; pinyin: huáxuě jiāngshī) is a zombie encountered in Frostbite Caves in the Chinese version of Plants vs. Zombies 2. He uses a Walrus Zombie as a slope to jump past the player's defenses. He will also ignore slider tiles, like Ice Weasels.

Ski Zombie is based on Skiing, an activity that uses skis to glide through snow. It can be a sport, a recreational activity, or just regular transport.

Ski Zombie absorbs 490 damage per shot and does not degrade.

Fortunately, this zombie only appears once Walrus Zombie is dead and acts as a ramp. If you see one of these jumping off, use Blovers as he'll get blown away by it. 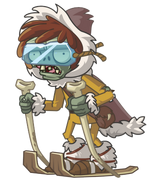 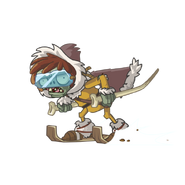 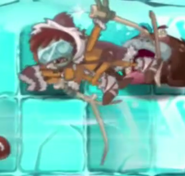 Ski Zombie in the air

Ski Zombie in the air without skis

Ski Zombie on the ground

Ski Zombie about to stand up 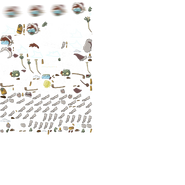 A shrunken Ski Zombie
Add a photo to this gallery

Retrieved from "https://plantsvszombies.fandom.com/wiki/Ski_Zombie?oldid=2354024"
Community content is available under CC-BY-SA unless otherwise noted.