Skeleton Zombie just wants to connect the brain bone to the stomach bone. He doesn’t have time to realize neither of those are bones.

Skeleton Zombie is a Graveyard zombie introduced in Plants vs. Zombies 3. He will collapse itself into a pile of bones upon defeat and can rise back if not quickly destroyed.

His appearance and ability are based on the Dry Bones, an enemy from the Super Mario franchise, being skeletal versions of enemies that can revive themselves from being defeated after a short period of time.

Like with Actor Zombie, he becomes a obstacle after being defeated, not only allowing other zombies to proceed but also reviving himself if not destroyed in time. Blockbuster is advised against him, as Blockbuster will prioritize Skeleton Zombie when he becomes an obstacle as well as doing extra Shatter damage. Bonk Choy and Fire Peashooter also work well against Skeleton Zombie due to their area damage. 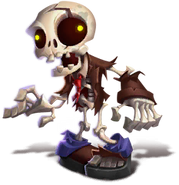 Skeleton Zombie during clash with Immorticia