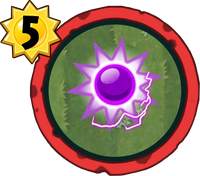 Not to be confused with Sun Bombs, a Brain Buster from Plants vs. Zombies 2.

Do 5 damage to a Zombie.
Incredibly hot and full of electricity. So much ouch.

Sizzle is a premium uncommon plant trick card in Plants vs. Zombies Heroes and a member of the

to play, and its ability does 5 damage to a selected zombie. Its closest zombie counterpart is Cakesplosion.

Sizzle is designed after Sun Bombs in the exclusive Brain Buster of Far Future in Plants vs. Zombies 2. The word "sizzle" is the hissing sound that is heard when food is cooked or fried.

Incredibly hot and full of electricity. So much ouch.

Sizzle does the highest amount of immediate single target damage out of all plant tricks, at 5. This allows it to remove many mid to late-game threats like Copter Commando, Walrus Rider, Shieldcrusher Viking, and Zombot Sharktronic Sub. Generally, it should be played to destroy, or at least cripple zombies with high health, like Gargantuars. Moreover, it can also be played to get rid of Amphibious zombies if you are playing as a hero that lacks Amphibious defenses, such as Captain Combustible.

However, Sizzle is very expensive, so as long as it is not critically needed, Sizzle should not be played on weak zombies, and instead should be saved until your opponent plays a powerful one. It also suffers from the inability to hit your opponent and the lack of tribes. If you are running a berry deck, you essentially do not need this card, as Berry Blast boosted by Sergeant Strongberry can do the same amount of damage for only 2

(unless it is used against

Armored zombies such as Knight of the Living Dead).

It is not recommended to put Sizzle in your deck as Solar Flare due to her having instant-kills to finish threats more neatly; Squash, for example, is completely superior to Sizzle as it costs the same, but is able to remove zombies regardless of health and does not activate "When hurt" abilities. For Captain Combustible and Nightcap, however, Sizzle can earn a place in their decks due to them lacking reliable instant-kill cards. Spudow should only play this against zombies with low strength like Jester and Dr. Spacetime, as Doom-Shroom and Shamrocket are better otherwise.

If possible, play a false threat to distract your opponent from destroying or heavily damaging your key zombies. Or, you can play Gravestone zombies, but you need to be careful if your opponent is Spudow, as he might play Grave Buster to counter them. Parasol Zombie and Zombie Coach can also protect your zombie(s) from Sizzle. 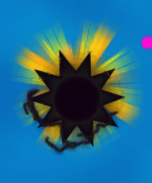 The player receiving Sizzle from a Premium Pack

The player receiving Sizzle from a Premium Pack (before update 1.6.27)

Retrieved from "https://plantsvszombies.fandom.com/wiki/Sizzle?oldid=2249507"
Community content is available under CC-BY-SA unless otherwise noted.