Silversword is an area of effect plant in Plants vs. Zombies 3. It deals damage to all zombies in a 3x3 area around it.

It was first introduced in v. 4.0.27 and is present in later levels of that version.

Silversword most likely draws inspiration from the East Maui Silversword, an endangered plant species with a similar name. The pointed, upright leaves of Silversword even share a similar color scheme and physical appearance of its real world counterpart. 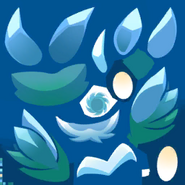