N/A
Charge your corn cobs until they're positively steaming, point at your target, and then ka-blam! Explosive corn fury.

28 sec.
Launch two highly explosive cobs.
Shuck Shot is the third ability for Kernel Corn in both Plants vs. Zombies: Garden Warfare 2 and Plants vs. Zombies: Battle for Neighborville. When activated, a short delay will occur for a few seconds. Kernel Corn will fire two corn cobs at the target which deals 150 damage (direct hit) for each cob up at a total of 300 if both hit the same target.

It is similar to the Foot Soldier's ZPG ability. It takes 24 seconds to recharge. Its alternate ability is the Multi-Shuck.

In Battle of Neighborville, Kernel Corn will now fire the shucks one at a time, dealing 90 impact damage and up to 35 splash damage.

If the player vanquishes 25 zombies with it, they will earn the Aww Shucks! achievement.

Charge your corn cobs until they're positively steaming, point at your target, and then ka-blam! Explosive corn fury.

Strategies with the ZPG should apply here.

Shuck Shot should be easy to identify, as usually, Kernel Corn will yell before it is fired. Not only this, a large yellow particle appears on Kernel Corn's cobs, which also signal that it is going to be fired.

If you cannot do anything to an incoming Shuck Shot, use any ability that gives you mobility, as this will allow you to dodge the Shuck Shot if you time it correctly.

Kernel Corn firing his Shuck Shot at a Moto-X Star

Shuck Shot being used in the trailer 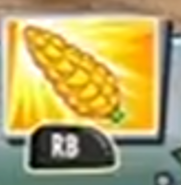