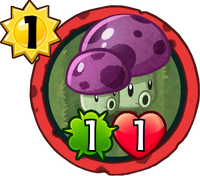 Puff-Shroom with Team-Up here.
Shrooms, bless their hearts, always wanting to cuddle up cuddly-like.
Shroom for Two is a premium rare plant card in Plants vs. Zombies Heroes and a member of the

. It does not have any traits, and its ability makes a Puff-Shroom in front of it when it is played, but only if its lane is unoccupied by another Team-Up plant.

Shroom for Two is in a sense two Puff-Shrooms, referring to a common tactic to swarm Puff-shrooms in the main Plants vs. Zombies games due to the plant's fast recharge speed and nonexistent cost.

Its name is a portmanteau of "shroom," referring to the fact that it is a mushroom, and the phrase "room for two."

Shrooms, bless their hearts, always wanting to cuddle up cuddly-like.

This is actually different from a plant with 2 strength and 1 health. It can take 1 extra hit, but has its attack halved when it does. This feature allows it to dish out 2 damage in its lane for each turn, unless if either the Puff-Shroom or Shroom for Two gets destroyed. Also, since this is 2 plants at once, it synergizes twice as much with both sides, notably Muscle Sprout, Astro-Shroom, Go-Nuts, Buff-Shroom, Punish-Shroom, Zombot Sharktronic Sub, or any zombie with Frenzy or Strikethough. However, since it damages for 1 twice rather than 2 at once, it will be walled by zombies with

As Nightcap, using Rescue Radish to Bounce Shroom for Two also helps, as it can be replayed to make more Puff-Shrooms, which also goes well with Punish-Shroom.

If Buff-Shroom successfully boosts both Shroom for Two and Puff-Shroom, it can be a good substitute to Pair of Pears as it has a beneficial tribe unlike the latter, with the added benefit of you saving 2 sun total.

Playing Shroom for Two on Mushroom Grotto can make two more Puff-Shrooms on random lanes, which can in turn synergize with the previously mentioned plants greatly. Since both cards are in the Kabloom class, all four Kabloom heroes can use this combo as well.

However, Shroom for Two is a poor counter against

Frenzy zombies, and can be easily destroyed with a

Strikethrough zombie, so it is not recommended to play it on the same lane as one unless it can destroy said zombie on its turn of combat. An example is Vimpire, who actually benefits from Shroom for Two due to his ability.

When it is played, it is best to have a zombie with the

Strikethrough trait on its lane in order to destroy both this plant and the Puff-Shroom made from it. Do not Bounce Shroom for Two, because if you do, your opponent can play it again to make another Puff-Shroom.

A good strategy is to use cards such as Total Eclipse or Pied Piper, both of which will destroy both. You can also use Fireworks Zombie or Barrel of Deadbeards, which will do one damage to both, which is still enough to destroy them.

Retrieved from "https://plantsvszombies.fandom.com/wiki/Shroom_for_Two?oldid=2355819"
Community content is available under CC-BY-SA unless otherwise noted.