For the version in Plants vs. Zombies 2, see Shrinking Violet.

A Zombie and Zombies next door to it get -2

. Then destroy any of those Zombies that have 0

.
Is she cute or terrifying? Yes.
Shrinking Violet is a triassic super-rare plant trick card in Plants vs. Zombies Heroes and a member of the

to play, and her ability gives a selected zombie and all other zombies on the lanes adjacent to that zombie -2

, then instantly destroys any of them that end up with 0

She is based on the plant in Plants vs. Zombies 2 with the same name and similar appearance.

Her description is a joke consisting of an ambiguous question (in terms of context) and answer, with the answer "Yes." being the punchline.

Her ability is based on her counterpart's ability to shrink and instantly remove "weak" zombies like Imp and Zombie Chicken in the aforementioned game.

Is she cute or terrifying? Yes.

Shrinking Violet can be a handy card to play, not only being able to give -2 strength to a maximum of three zombies at once, but also because of the lack of efficient strength-lowering cards in the

But not only that, she also instantly destroys any zombie that ends up with 0 strength. While having a zombie clog up a lane is more beneficial than destroying it due to the zombies' lack of Team-Up, Shrinking Violet prevents your opponent from reboosting or Evolving that zombie, and also the zombie's ability from activating continuously.

Shrinking Violet may be good for lowering the strength of any grouped threats, but she truly shines at punishing bulky threats with low strength like Quickdraw Con Man, Tankylosaurus, Stompadon, and Teleportation Zombie, especially since most have persistent abilities.

Green Shadow synergizes the best with Shrinking Violet, since she has access to moving cards to group several zombies at once. While not the most effective option, Re-Peat Moss also benefits from Shrinking Violet since she is a trick.

Rose could pair it with Whack-a-Zombie, Chomper, or Toadstool, but playing two Shrinking Violets is much more cheap and cost-effective unless she can only affect one zombie, or the zombies end up with 3 strength after one Shrinking Violet.

The downside of Shrinking Violet is her lack of synergy. Despite her being in the flower tribe, Briar Rose and Power Flower only synergize with flower plants, and she can't gain

Strikethrough via Cosmic Flower either due to being a trick. Shrinking Violet also doesn't do well against opponents with plenty of high-strength zombies, strength-boosting cards, or Parasol Zombies.

Shrinking Violet is an annoyance to attackers with moderate strength, which can already be a pain to you. However, she is a large threat to any low-strength zombie, because while the strength loss isn't very dangerous, her ability to destroy any with 0 strength is. If you have any threats that cause trouble to your opponent just by staying alive like Dr. Spacetime and Zombot Drone Engineer, they will most likely be the primary target of this trick.

The best option would be to give them the

Brainy heroes have access to Parasol Zombie. Fortunately, each other class has their own way of dealing with Shrinking Violet's ability.

Hearty heroes have Defensive End to make her more expensive (although he cannot stop her from being played on turns 4 and 5) as well as Jurassic Fossilhead, both

Beastly heroes have access to strength-boosting cards to allow their zombies to survive (not to mention that most of their cards have high strength), while the

Sneaky class can either Bounce the affected zombies via Firefighter or play Mixed-Up Gravedigger to reset their strength.

If a zombie's strength is lowered to the point where it cannot function well as a fighter, in general the best solutions would be bouncing the zombie, boosting it, destroy it with Final Mission for extra damage, or play an Evolution zombie on it. 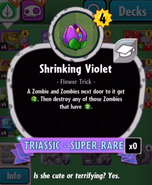 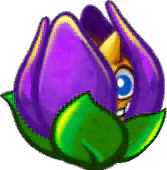 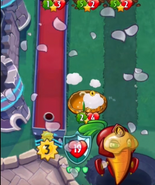 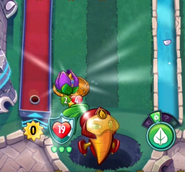 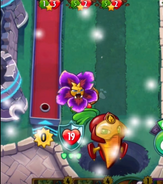 Gigantic Dr. Spacetime and Intergalactic Warlord due to the visual bug