For other uses, see Starfruit.
For the achievement with a similar name in Plants vs. Zombies, see Shooting Star.

This attacks in all five lanes.
When you see a Shooting Starfruit, make a wish, any wish! Any wish that involves takin' down Zombies, that is.
Shooting Starfruit is a galactic legendary plant card in Plants vs. Zombies Heroes and a member of the

. It does not have any traits, and its ability allows it to attack on all five lanes.

Its name is portmanteau on the words "shooting star," referring to the way it attacks, and "Starfruit," the Plants vs. Zombies plant it is based on.

Its description references the fact that people often make a wish when they see a shooting star.

When you see a Shooting Starfruit, make a wish, any wish! Any wish that involves takin' down Zombies, that is.

While its stats are nowhere near the standards for a 5-sun card, Shooting Starfruit is still a powerful plant, with the ability to attack on every single lane. This ability allows it to do up to 10 damage your opponent each turn.

Much like Threepeater and Tricorn, when its strength is increased, it increases the damage it does to all the lanes it attacks on. This can easily make Shooting Starfruit highly lethal in conjunction with any form of strength-boosting cards such as Fertilize and Berry Angry. However, this also means that Shooting Starfruit will be the prioritized target for your opponent due to how potent it is, and you will need to give it some protection due to its poor health of 2

The best hero to use Shooting Starfruit with is Green Shadow, simply due to how well Mega-Grow cards synergize with it. She is able to boost it for even more damage, and has access to cards like Coffee Grounds and Espresso Fiesta for bonus attacks. Plant Food is possibly one of the best cards to boost it with, as upon using it, not only will Shooting Starfruit attack for 3 damage on all lanes resulting in 15 damage total, but also boost its stats to 3

, rendering it invulnerable to dangerous instant-kill cards such as Rolling Stone, Weed Spray, and Rocket Science. Another method for Green Shadow is to play Lily of the Valley or Onion Rings to boost its stats to 4

, which allows it to instantly defeat your opponent if all 5 lanes are unprotected. However, this makes it vulnerable to Rocket Science. Even then. Green Shadow can use Umbrella Leaf to protect this plant from tricks.

Examples of environments that work well with Shooting Starfruit are The Red Plant-It and Coffee Grounds, allowing it to gain a massive boost in stats and perform bonus attacks each turn respectively. Likewise, playing Shooting Starfruit in Pair Pearadise will make an extra copy of it, which will basically allow you to attack on every lane twice from a single lane.

Having Shooting Starfruit in Planet of the Grapes will potentially set up the most powerful card-drawing machine in the game as Shooting Starfruit has a very high chance of hitting your opponent at least once, allowing you to draw at least one card. Force Field and Spikeweed Sector will render Shooting Starfruit immune to damage and make the zombie on its lane take 2 damage every turn respectively, making them good tools to protect Shooting Starfruit. However, keep in mind that it is still vulnerable to instant-kill tricks like Locust Swarm. The environments can also be replaced easily.

Rose can make use of Shooting Starfruit's ability to attack on every lane by playing it in Venus Flytraplanet, allowing her massive healing. Due to each attack activating Venus Flytraplanet's ability separately, Pepper M.D. will activate its own ability for each attack that is not blocked by the Super-Block Meter or a gravestone, allowing it to get a massive boost of up to +10

. Similarly, Heartichoke will do damage to your opponent five times, but keep in mind that each hit will fill up your opponent's Super-Block Meter.

Nightcap can also boost its strength, although he has no way of increasing its health besides Storm Front, which only provides a minor health boost. Other strength-boosting cards still render it vulnerable to many instant-kill tricks such as Rocket Science or any damaging trick like Bungee Plumber. The opposite can be said for Citron and Beta-Carrotina, where they can boost its health, or play it in Force Field or behind defensive Team-Up plants to improve its survivability, but have no way of increasing its strength besides Pumpkin Shell, making Shooting Starfruit vulnerable to Rolling Stone or Weed Spray. However, they have access to Pecanolith, which can convert its health into strength. They also can use Three-Nut to get a cheap strength boost.

An extremely expensive yet effective combo is playing The Great Zucchini, then playing this, as Shooting Starfruit will wipe out all the zombies (and survive, unless they've been boosted), and let The Great Zucchini land 7 damage on your opponent.

Whenever you see Shooting Starfruit in play, you should dispose of it quickly, since it can take you out in as few as two turns. Fortunately, its raw stats are really poor for its cost, which means that you can get rid of it easily with cheap tricks like Bungee Plumber and Rolling Stone. If there are multiple Shooting Starfruits on the field, Weed Spray or The Chickening will do the job. If it is boosted, Rocket Science, Locust Swarm, or Cut Down to Size will take care of it easily.

Alternatively, you can also lower its strength to 0 with cards such as Landscaper, rendering it completely useless. This is especially useful if you are up against Citron, Beta-Carrotina, or Rose, who possess no way of boosting it back other than Bouncing it with Rescue Radish and replaying it, or by playing Spineapple in the case of Citron and Beta-Carrotina. But this strategy is not as effective when against Green Shadow or Nightcap, who do have access to strength-boosting cards to restore its strength. Also, speaking of Green Shadow, you may want to play Bonus Track Buckethead if you have him in your deck, as Green Shadow may have bonus attack cards to allow Shooting Starfruit to wreck you or your zombies easily.

If your opponent plays Planet of the Grapes on its lane, try to destroy it with Squirrel Herder or override the environment before they can draw cards, which could give them a huge card advantage. 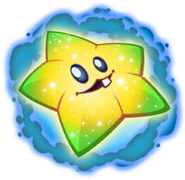 Time to Shine being played on Shooting Starfruit 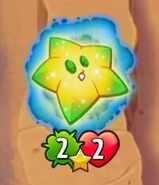 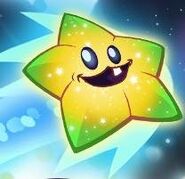 Shooting Starfruit on the title screen

Shooting Starfruit with the 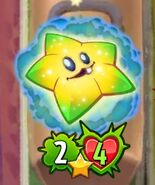 Shooting Starfruit while Pecanolith is on the field

Two Shooting Starfruits on a lane after being transformed by Molekale

Evaporate being played on Shooting Starfruit