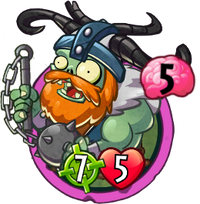 When this hurts the Plant Hero, empty their Block Meter.
Been crushing shields since the 9th Century. Has gotten pretty darn good at it.
Shieldcrusher Viking is a premium legendary zombie card in Plants vs. Zombies Heroes and a member of the

He is based on a Viking, a Norse seafarer who raided and traded from the Vikings' Scandinavian homelands across wide areas of northern, central and Eastern Europe, during the late 8th to the late 11th centuries.

His name is a combination of "shieldcrusher," referring to his ability, and "Viking," the historical people he was based on.

Been crushing shields since the 9th Century. Has gotten pretty darn good at it.

Shieldcrusher Viking is one of the few cards in the game that can affect your opponent's Super-Block Meter, and being able to reset it completely, he will allow you to inflict damage on your opponent much more safely. Not only that, his high strength and good health for his cost are also what make him a formidable threat, so even if you do not intend to use his ability, he can be used as a powerful fighter to destroy most plants that can be played on turn 5.

However, since he has to attack to make an impact, Shieldcrusher Viking is extremely vulnerable to plant cards, as zombies play their fighters first and unlike Octo Zombie, he doesn't return when destroyed. Therefore, it would be ideal to have support cards to help Shieldcrusher Viking survive such as Teleport, Lurch for Lunch, and Parasol Zombie.

Super Brainz and Huge-Gigantacus synergize very well with Shieldcrusher Viking, as the

Sneaky class is specialized in getting around your opponent's defenses and hitting them as much as possible, with

Strikethrough-granting cards like Laser Base Alpha (and Ice Moon for Huge-Gigantacus, which also prevents plants played on his lane from damaging him for a turn) to guarantee a huge blow to the opponent, regardless of whether a plant is blocking him or not, and moving cards like Smoke Bomb (and Carried Away for Super Brainz, which allows either a lane to be cleared or Shieldcrusher Viking to do high bonus damage right away). He could also be used in their pirate decks, but only Captain Flameface would be ideal for synergy, as Swashbuckler Zombie won't likely survive until turn 5. Even then, strikethrough is already strong enough for him.

zombie as soon as turn 3, which, at that point in the game, can be very devastating for your opponent, especially if they do not have any cheap cards to remove Shieldcrusher Viking from the field. Strength reduction may help if a powerful plant is played to intercept him. Addtionally, you have access to Going Viral, a relatively cheap trick which would allow him to smash his way through plants to get to the Plant Hero,

Immorticia does not really have much synergy with Shieldcrusher Viking. Neither of his tribes synergizes with the

Beastly class, and he already has excellent stats, so there is not much purpose in boosting him. While Immorticia can give him frenzy, it is simply too expensive and she is better off not playing him at all.

Likewise, Professor Brainstorm also does not benefit much from Shieldcrusher Viking. He can give him the

Overshoot trait with Moon Base Z or Disco Dance Floor which allows for instant activation of his ability, but this is way too expensive for rush and swarm decks. If you want

Bullseye damage, you are better off using a Disco-Naut aggro deck or a Headhunter dancing deck.

Overall, Shieldcrusher Viking is a situational card, but he definitely is a good one in the right deck.

Bullseye and the ability to empty your block meter is no joke. However, any zombie that is only formidable when it attacks is usually easy to take care of. Like similar zombies, Shieldcrusher Viking needs to attack you directly to be worthy, and as such, instant-kill cards like Squash and Briar Rose can nullify him before he truly becomes dangerous. This would essentially mean your opponent is always going to play this card alongside other cards, so maintaining good control over the field and eliminating any possible support would discourage your opponent from playing Shieldcrusher Viking. Or, since he is rather expensive, aggro decks can pressure your opponent into fighting fire with fire instead of playing such an expensive zombie and additional cards. If your opponent attempts to play him in the Zombie Tricks phase, then Brainana, Dark Matter Dragonfruit and Forget-Me-Nuts can delay such attempts.

Just remember that Body-Gourd's ability is useless at protecting you from Shieldcrusher Viking's attack, since like all

Bullseye zombies, his attack ignores the block meter, which, in turn, empties it as well.