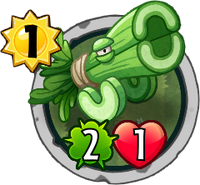 None
Ordinance is most effective with peanut butter and raisins.
Shellery is a premium uncommon plant card in Plants vs. Zombies Heroes and a member of the

. It has the Team-Up trait and does not have any abilities.

It is based on celery (Apium graveolens), a marshland plant variety in the family Apiaceae that is commonly cultivated as a vegetable since antiquity, and a cannon, a piece of artillery that uses gunpowder or other usually explosive-based propellants to launch a projectile, which may or may not be explosive.

Its name is a portmanteau of "shell," referring to the projectiles it spits, and "celery," the real-life plant it is based on.

Ordinance is most effective with peanut butter and raisins.

Shellery is basically a mix of a glass cannon (like Bonk Choy) and a wall (like Wall-Nut); it doesn't excel at attacking or defending, but Shellery's strength is its versatility. You can protect your other important plants with it, especially on missions where you are given plants from the start, and use it to land damage to whatever is in front of it and pressure early-game setup zombies at the same time, which is not possible for many early-game plants. However, Shellery will be targeted by tricks a lot due to that, so you should watch out for those.

Shellery also works very well with cards that get more effective the more plants there are on the field such as Pineclone, Berry Angry, and Storm Front due to its low cost and the aforementioned Team-Up trait.

Shellery has only 1 health, so any damaging/stat-degrading zombie or trick can easily destroy it. Since your opponent will most likely play it in front of a plant, zombies with the

Strikethrough trait such as Hot Dog Imp are especially good choices since they can hurt (and even destroy) both Shellery and the plant behind it. Total Eclipse is also able to destroy this plant easily if its health hasn't been boosted and prevent any more Shelleries from being played. Stat-degraders like Nibble and Acid Rain are a perfect counter to this plant.