Not to be confused with Clamshell God Zombie, a Zombie that appeared in East Sea Dragon Palace in Plants vs. Zombies Online.

Uses shell for defense and to attack plants.

Shell Zombie was envious of the seagull zombies flying in the air. In order to fulfill his dreams, he went to a shady shop and spent a huge sum of money on super glue to stick a shell onto his hands, but he still can't fly!

Shell Zombie (贝壳僵尸; pinyin: bèiké jiāngshī) is a zombie encountered in Big Wave Beach in the Chinese version of Plants vs. Zombies 2. He has very high toughness and can absorb as much damage as Knight, Blockhead, and Fossilhead Zombies. Additionally, when plants are in front of him, the zombie snaps his clam shut to immediately kill them.

Shell Zombie has "Machined" toughness, therefore allowing it to absorb as much damage as Knight and Blockhead Zombies. He has an effective way of killing plants rapidly. He is also immune to freezing and damage-over-time effects.

Shell Zombie resides within a large purple clamshell, that encases his body down to his feet. The zombie wears a single blue flip flop on his left foot.

This is a very dangerous zombie, especially in groups. Like Mecha-Football Zombie, he has very high health and does not normally eat plants. However, unlike Mecha-Football Zombie, this zombie eats plants when his clam is destroyed, but his clam will instantly destroy any plant he comes across like a Jurassic Rockpuncher or MC Zom-B, but the former makes the tile unplantable for a short while, and the latter destroys plants in a 3x3 area. It is vital to not have important plants on the rightmost columns, as he will mow through them, so keep any important plants near your house. You should destroy his clam quickly, as it can crush an unlimited number of plants. This could result in your lawn defenses being destroyed and result in you wasting countless diamonds. If combined with Octo Zombies, Fisherman Zombies, Surfer Zombies, Deep Sea Gargantuars, and the Low Tide ambush, they can cause massive mayhem.

Immediately use Plant Food on your Lord Bamboos to deal splash damage to destroy his clamshell quickly. Temporarily stall it with Iceberg Lettuce and Kernel-pult to prevent him from doing massive damage. It is recommended you kill any zombies near the Shell Zombie and then plant Tangle Kelp to deal damage. However, it is not recommended to use Winter Melon, Snow Pea, and Cryo-shroom as the zombie with its clamshell is immune to their chilling effect, making them unable to slow down the Shell Zombie unless his shell is missing.

Acidic Citrus can also be of use here, since it deals extra damage against armor. If you use multiple Level 3 Acidic Citruses against a single Shell Zombie, the shell will quickly be corroded. Plant Food on the Acidic Citrus will deal large amounts of damage to all zombies as a secondary option.

Caulipower is another good plant to use against him, as like any other high-health zombies, Caulipower's hypnosis beam will bypass it and defeat him instantly. If he still has his shell, the hypnotized zombie will work even better, as he can proceed to instant-kill most zombies in his way. However, do not attempt to use Hypno-shroom against him, as he can kill it.

On land, he is able to kill Spikerocks in one hit, so don't use them when he appears, as they won't stall him.

A Shell Zombie with its shell closed

A Shell Zombie missing its shell

Shell Zombie in a promotional picture

An open Shell Zombie in the water 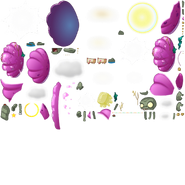 A shrunken Shell Zombie inside its shell

Retrieved from "https://plantsvszombies.fandom.com/wiki/Shell_Zombie?oldid=2370232"
Community content is available under CC-BY-SA unless otherwise noted.