Like Shamrock, he is based on a four-leaf clover, a rare version of the common three-leaf clover of the genus Trifolium that is believed to bring luck.  He is also based on a rockstar, a member of a rock band or solo artist of rock music, especially one with a celebrity status; likely a punk rocker based on his appearance.

His name is a portmanteau of "shamrock," a young sprig of clover used as a symbol of Ireland; and "rockstar," referring to his appearance. Its name may also be a pun of both words and "rock" due to the fact that it somewhat resembled a rock when it hid.

"I do this for the music," he says. Then he eradicates a zombie with a rainbow blast. "For the music".

This plant packed a solid punch. When the situation called for long distance firepower, this was the best plant to use. When this plant was used alongside Acespearagus, the player would have had a very potent, long range zombie-killing combo that would last long.

The player got the Shamrockstar. 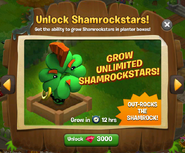