Destroy a Zombie that has 4

or more.
The bigger they are, the harder they go boom.
Shamrocket is an event trick plant card in Plants vs. Zombies Heroes and a member of the

to play, and its ability instantly destroys a zombie with 4

or more. Its zombie counterpart is Rocket Science.

Shamrocket was introduced in update 1.12.6, along with Spyris, Electric Blueberry, Plucky Clover, Leprechaun Imp, and Bonus Track Buckethead. It is now craftable as of update 1.16.10.

It is based on a shamrock, a young spring of a clover used as the symbol of Ireland, and a rocket, a missile, spacecraft, aircraft, or other vehicle that obtains thrust from a rocket engine.

Its description is a reference to the idiom "the bigger they are, the harder they fall."

The bigger they are, the harder they go boom.

Shamrocket is basically the plant counterpart of Rocket Science, due to them having the exact same use. However, unlike Rocket Science, Shamrocket can't be used on zombies that were boosted through tricks on that turn, meaning you have to take the hit and retaliate next turn. On the other hand, since plants play after zombies, you can destroy a high-strength zombie before your opponent can boost it or make it do a bonus attack.

Generally, you can also aim to destroy powerful zombies with Shamrocket like Zombot 1000, Nurse Gargantuar, Wizard Gargantuar, and other zombies that have more than 4 strength. However, since you can only have four in a deck, only use them on zombies that will cause you a lot of trouble.

Shamrocket also serves as an alternative to Doom-Shroom as you can destroy a single zombie that has high strength, while at the same time keeping your high-strength plants intact. However, if you expect that the zombie hero will play multiple high-strength zombies, then Doom-Shroom should be used as it affects multiple fighters.

Be careful when facing a Guardian hero, as boosting your zombies may cause them to be destroyed by this trick. The hero that you should be most cautious of is Wall-Knight, since he can pair it up with Whack-a-Zombie, which will allow him to destroy all zombies regardless of strength for 3 sun.

It is difficult to anticipate if your opponent has this card, and therefore, it can be hard to counter. The best way to prevent this trick from wrecking you is to play lots of Gravestone zombies, as they cannot be affected by it until the turn after they are played, but then you have to watch out for Grave Buster and Blockbuster.

You can also play lots of zombies with 3 strength or less, though later in the game, this strategy becomes less reliable. If you want to play a zombie with at least 4 strength but want to prevent it from being destroyed by this trick, you can use Teleport or Teleportation Zombie to play it in the Zombie Tricks phase, protect them with Parasol Zombie, or delay it with Defensive End. 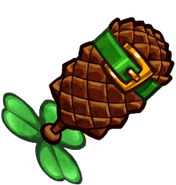 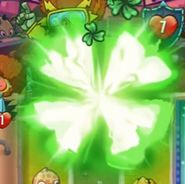 Shamrocket on the advertisement for the Time Travel Bundle

Shamrocket on the advertisement for the Weekly Events

Shamrocket on an advertisement for the Event Rewind Bundle 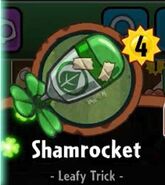