Shoots far. Hides when zombies are nearby.

Shamrock was a plant in Plants vs. Zombies Adventures. Its VIP version was the Shamrockstar. It was a long ranged plant that fires rainbows stronger than a pea, but fired slowly, similarly to Aspearagus. When a zombie came close to it, it would hide until the zombie either moves away from it or is defeated. It was unlocked after reclaiming The Police Station Lot.

It is based on a four-leaf clover, a rare version of the common three-leaf clover of the genus Trifolium that is believed to bring luck, which is also described in Shamrock's Facebook page description.  A shamrock, which this plant is named after, is a young sprig of clover used as a symbol of Ireland.  Its name may also be a pun of "shamrock" and "rock" due to the fact that it somewhat resembled a rock when it hid.

You could say Shamrock is lucky, if your definition of “luck” includes “hiding whenever there’s anything dangerous or herbivorous around.” Which is a kind of luck, you must admit.

If zombies come close to Shamrock, it hides like the Scaredy-shroom. It is best to keep Shamrocks as far away from zombies as possible. It is also good to put it in a spot where only one path can get to it. Unlike Scaredy-shrooms, hiding Shamrocks are ignored by zombies, making them practically invincible (although they technically could still be killed by Gas Can Zombies' explosions). 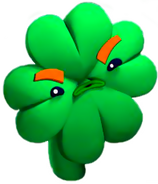 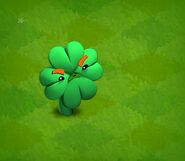 The player got the Shamrock. 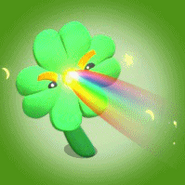 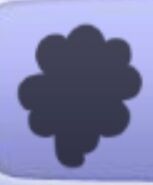