Super Rare
The Shadow Flower works from the darkness, righting wrongs and singing songs - her mask disguises her true Sunflower heritage.
Shadow Flower is a Super rare variant of Sunflower in Plants vs. Zombies: Garden Warfare and a Rare variant in Plants vs. Zombies: Garden Warfare 2. She is able to fire her primary weapon faster than other Sunflowers, but it also has a slightly longer reload time.

The Shadow Flower works from the darkness, righting wrongs and singing songs - her mask disguises her true Sunflower heritage.

Shadow Flower's dark energy allows her to fire faster than other Sunflowers!

Dark Energy is the primary weapon of Shadow Flower; all facts below apply to a fully upgraded weapon.

The Shadow Flower's primary weapon is the Dark Energy. It deals the same damage as the standard Sun Pulse at around 8 to 9 impact and 9 to 10 critical damage, but it has a larger damage drop off and takes longer to reload. It compensates for this by having a faster rate of fire.

This shadowy technique allows the collection of light in a way that helps her reload faster.

The Shadow Flower is basically a Sunflower with a faster fire-rate, at the cost of reload speed. It relies on getting quite close to targets due to its high damage drop-off. Sunflowers are most effective when within close proximity of teammates so that they can heal them.

Shadow Flower can outshoot most Foot Soldiers in 1v1s, that doesn't mean that she is perfect. Try to time your reloads so that you aren't caught off guard with only half a clip left. Reloading every time you vanquish a Zombie player is recommended (unless there are multiple Zombies in the area in which case, don't stop shooting until your clip is empty). While reloading, try to jump around to make it difficult for Zombies to vanquish you. Shadow Flower is most vulnerable when reloading.

It is useful to travel with another teammate so that you can support them by healing them in battle. While fighting with a teammate, stay by them so that you don't break the heal beam, but try to move around as much as possible to make yourself harder to hit.

The Shadow Flower is not to be underestimated. Her high damage output compensates for low health. When trying to vanquish a Shadow Flower, make sure to NOT run in a straight line towards her. Deal with her as you would a default Sunflower and you should be fine. Engineers are great Sunflower counters, as they are able to damage groups of plants at a time. Try to ambush this flower and attack heavily when she is reloading. 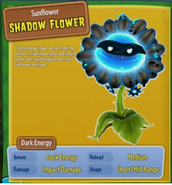 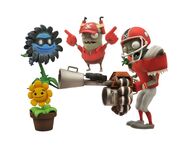 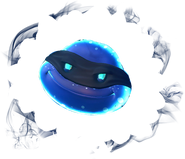