Can use Dynamite Dodge every 7 seconds
Shadez 2 Cool is a Zombie Battle Leader in Plants vs. Zombies: Battle for Neighborville. He resembles a 80s Action Hero wearing "The Finisher" Costume, "Groovy Hair" hat, and "Groovy Glasses" accessory.

Shadez 2 Cool is able to use Dynamite Dodge every 7 seconds, faster than it's normally allowed. This is especially noticeable if you approach him. Because of his ability, it can be quite irritating to attack him since he'll just keep dodging away from you. Other than that, he doesn't have any other special abilities, and the Dynamite Dodge is more of a nuisance than an actual threat due to its low damage, so defeating him with any classes shouldn't be too difficult. 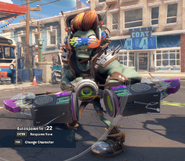