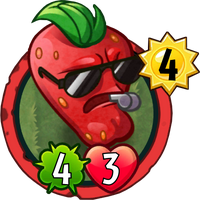 When another Berry hurts a Zombie or Zombie Hero, Sergeant Strongberry does 2 more damage to it.
He's intense, sure. But he just wants the berries to be all they can be.
Sergeant Strongberry is a premium super-rare plant card in Plants vs. Zombies Heroes and a member of the

He is based on the strawberry, a widely grown hybrid species of the genus Fragaria that is cultivated worldwide for its fruit, and a sergeant or a coach.

His name is a combination of "sergeant" and "Strongberry," which is a portmanteau of "strong" and "strawberry."

He's intense, sure. But he just wants the berries to be all they can be.

Sergeant Strongberry on his own has average stats for his cost of 4 sun. However, he is unable to activate his ability by himself, so he requires other berries to be very effective. Sergeant Strongberry really shines in a deck that has a lot of berry cards in it, as when played with him on the field, he can dish out a lot of additional damage. It is recommended to carry Berry Blast, Strawberrian, Sour Grapes, Cherry Bomb and/or Grapes of Wrath with this, as they are all berries that easily activate Sergeant Strongberry's ability. Bluesberry is also useful as it can do 2 damage to a zombie or zombie hero, plus another 2 damage with the Sergeant Strongberry for a total of 4. As for most synergetic cards, only bring this into your deck if you have at least 2 or more different berries in your deck.

For easy reference, here's a list of berries that will benefit from his ability:

Remember, Squirrel Herder can destroy him since he is a berry, so watch out for her.

Countering this plant is not too hard, as long as there are no other berries besides himself. Most zombie cards can destroy this plant fairly easily. Rocket Science can destroy him in one hit, but cannot hit other berries with less than 4 strength due to his ability not directly increasing strength. However, be careful if he stays on the board, as Kabloom heroes will be able to destroy many zombies or damage you using berry cards, especially using Strawberrian or Sour Grapes, so be sure to destroy this plant as soon as possible. Cakesplosion can also destroy Sergeant Strongberry as long his health has not been boosted.

A perfect solution is Squirrel Herder, as she can destroy him since he is a berry. However, be warned that Spudow and Nightcap have access to Grave Buster, Blockbuster, Spyris, Cool Bean and Winter Squash, and Grave Mistake due to her Gravestone trait.

Retrieved from "https://plantsvszombies.fandom.com/wiki/Sergeant_Strongberry?oldid=2373207"
Community content is available under CC-BY-SA unless otherwise noted.